Who Are Those Guys? Renato Cestie 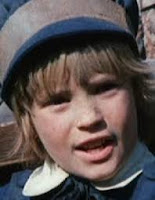 At just 8 years of age he made his debut in the cinema with an appearance in the thriller/horror film “Reazione a catena” (1971) by Mario Bava followed by another film of the same genre: “Il diavolo nel mente” by Sergio Sollima ( 1972 ). As a child he appears in fotoromanzi magazinez and in films like the successful comedy western. “It Can be Done ... Amigo” (1972) by Maurizio Lucidi, played alongside Bud Spencer and Jack Palance.

But Renato Cestiè is remembered above all for the roles of the little unfortunate protagonist of various dramatic films of the so - called Lacrima movies, a great success in the seventies also at international level, as “Cuore” ( 1973 ) by Romano Scavolini , “L'albero dalle foglie rosa” (1974) by Armando Nannuzzi, “Il venditore di palloncini” (1974) by Mario Gariazzo, “L'ultima neve di primavera” (1973), and his most famous film appearance “Bianchi cavalli d'agosto” (1975) di Raimondo Del Balzo.

A sparsely productive period followed, but at the end of the eighties he returned to the spotlight playing for three seasons the role of Massimo Conti in the popular television series of Italia 1 ‘I bambini della 3ª C’ (1987-1989 ). In the mid-nineties he definitively abandoned the entertainment world and dedicated himself to the management of a gym in Rome. On March 23, 2014 he participated as a competitor on a Sunday episode of the TV quiz of  Canale 5 Avanti un altro! conducted by Paolo Bonolis.