Upon hearing the sad news of Burt Reynolds’ passing, we share with you C&I’s last interview with him from a couple of years ago. We continue to appreciate the legend and his contributions by offering a look at a 2003 C&I “Live From” interview conducted with Reynolds in advance of the release of his Hallmark western movie, Hard Ground.

The TV event came along at a time when westerns weren’t getting much big-screen steam. Said Reynolds at the time, “… it’s up to networks like Hallmark to keep the genre alive. Which is funny, when you think about it, because Westerns are geared more toward older audiences, and most television, as you know, is geared toward 12-year-olds.”

Enjoy more of the late star’s special brand of humor by reading the entire interview as it appeared below, and find Hard Ground for purchase on Amazon, if you’re interested. 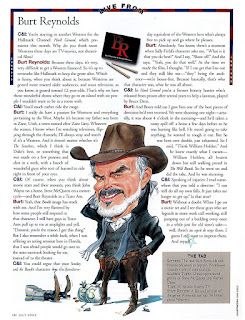 \
C&I: You’re starring in another Western  for the Hallmark Channel: “Hard Ground” which premieres this month. Why do you think most Westerns these days are TV-movies, not theatrical films?

BR: Because these days, it’s very, very difficult to get a Western financed. So it’s up to networks like Hallmark to keep the genre alive. Which is funny, when you think about it, because Westerns are geared more toward older audiences, and most television is geared toward 12-year olds. That’s why we have those wonderful shows where they go to an island with six people I wouldn’t want to be in a room with.

C&I: You’d much rather ride the range.

BR: I really do have a pension for Westerns and everything pertaining to the West. Maybe it’s because my father was born in Zane, Utah, a town named after Zane Grey. Whatever the reason, I know when I’m watching television, flipping through the channels, I’ll always stop and watch if it’s Western. And it doesn’t matter whether it’s The Searchers, which I think is Duke’s best, or learned to ride right in front of your eyes.

C&I: Of course, when you think about movie stars and their mounts, you think John Wayne on  horse, Steve McQueen on a motorcycle-and Burt Reynolds in a Trans Am.

BR: Yeah, that Bandit image has stuck with me. And I’m very flattered by how some people still respond to that character. I still have guys in Trans Ams pull up to me at stoplights and yell, “Damnit, you’re the reason I got this thing.” But I also remember a while back, when I was offering an acting seminar here in Florida, that I was afraid people go over to the auto-racetrack looking for me, instead of the theater.

C&I: You could argue that your Smokey and the Bandit character was the modern-day equivalent of a Western hero who’s always free to pick up and go where he pleases.

BR: Absolutely. You know, there’s a moment when Sally Field’s character asks me, “What is it you do best?” And I say “Show off.” And she says, “Yeah, you do that well”. At the time we made the film, I thought, “If I could get that line out and they still like me-‘They being the audience-we’re home-free. Because basically, that’s who that character was, what he was all about.

BR: And Bruce told me I gave him one of the best pieces of direction he’d ever received. We were shooting one night-actually it was 4 o’clock in the morning-and he’d taken a nasty spill off a horse a few days before so he was hurting like hell. He wasn’t going to take anything, he wanted to tough it out. But he was bent over double, just exhausted. So I said, “Think William Holden.”  And he knew exactly what I meant-William Holden, all beaten down but still walking proud in The Wild Bunch. So he went on and did the take. And he was stunning.

C&I: Speaking of injuries: I read somewhere that you told a director: “I can do my own falls. It just takes me longer to get up.” Is that true?

BR:  Without a doubt. When I go on a movie set and see those guys who are legends in stunt work still working, still jumping out of a building every once in a while just for old times sake-well there’s a spirit de corps there. I guess I still want to impress them. And myself.