Call of the Wild Geese

Summer 1886 Manitoba, Canada: The young Amelia Jaspers flees with her lover, who shoots a man while fleeing and is then killed himself. Amelia is sentenced to two years in prison for manslaughter. In prison, she gives birth to her son, who is named after his father Mark Jordan. He is given away for adoption and grows up with missionaries. Amelia is expelled from Manitoba after being released from prison. On her way through Canada she is picked up by farmer Caleb Gare.

1910: Amelia has been married to the Puritan Caleb Gare for 20 years. They have two daughters: the adult Judith and the younger Ellen. Caleb is a despot who reminds his wife every year of her past in prison and how her illegitimate son lives with missionaries and knows nothing about his mother. His children treat Caleb with relentless severity. Both are never allowed to leave the area and do not know music or what is going on in the world. Even in the nearby village of Yellow Post Caleb is unpopular: He often lends money, which he demands back with high interest. If the farmers cannot pay the loan, he will take their land from them or demand their livestock. Not only does the fate of the men in the village affect Caleb - a debtor to whom Caleb pays the debts against the transfer of the lake, from which the man fishes and sells the fish, takes his own life. Also the life of the daughters are controlled by Caleb. Judith has fallen in love with drover Sven Sandbo, who has to drive a herd of horses to Middlesquare and is therefore for a while away from the farm. Caleb intercepts Sven's letters to Judith and hopes she'll forget him so. When his younger daughter Ellen falls in love with Caleb's farm worker Malcolm, Caleb expels the young man, who goes back to the Indians in Chickentown not far from Middlesquare.

Sven meets a land surveyor named Mark Jordan on his way to Middlesquare, when he is on his way to Yellow Post. Sven invites him to stay there with his mother. Mrs. Sandbo is taken by Mark, who sends her greetings from her son. Mark has traveled around the world, bringing yellow-post music with a gramophone, and gives Mrs. Sandbo and Judith, who came to visit, fragrant smellin soap. Mark's arrival amuses Caleb in a diabolical way. He tortures his wife with the news that her son is in town. He invites him to his farm and plays with the bewilderment of Amelia, so he uses his knowledge of Mark's origin as a means of pressure against them. Even as Mark and Judith approach, he sees no reason to worry, knowing that Mark will only be in Yellow Post for a few weeks. However, when Mark asks Amelia to marry Judith, she secretly confesses his origins. Meanwhile, Malcolm has sent for Sven from Chickentown. He had noticed Mark's arrival at Yellow Post and his relationship with Judith before he left the farm. Now he warns Sven that he could lose Judith. Sven rides right back to Yellow-Post. Judith wants to escape the suppression by her father and rides away with Sven, but he still has no land with which he could settle down on. He puts her off. When Caleb questions her about her meeting with Sven, she hurls a hatchet at him, but misses him. He ties her up and leaves her behind as a prisoner in the barn of the farm. Also Amelia and Ellen cannot help her. Sven and Mark now plan to rescue Judith at the upcoming summer party: Since there was a prison on Caleb's farm in the village of Gerede, to prove the opposite, he must appear at the party with both daughters. During the village dance Judith disappears secretly and flees with Sven. Caleb is upset and challenges Amelia. He wants to force her obedience by threatening to tell Mark everything about his background, but she tells him that he has already learned everything. She will leave him with Ellen and go away with Mark. At that moment, the fire bell is rung. It's burning near Yellow Post and the flames have already reached Caleb's farm. Caleb hurries to the farm and tries to get his hoarded money out of the farmhouse. He is killed by the collapsing building. Amelia goes with Mark. Meanwhile, Judith and Sven ride side by side across the prairie. 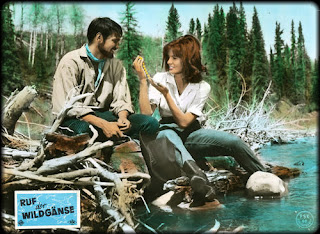