Almeria, Hollywood to the Spanish 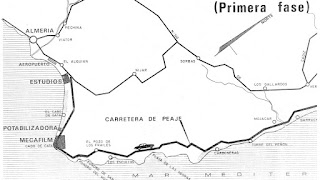 At the beginning of August 2018, a feasibility study for the creation of a City of Cinema in Almería has been tendered. With this initiative of the Junta de Andalucía, an old aspiration of Almeria's industry and society resumes, this time from the base, after almost half a century of failed projects that generated as much expectations as frustration.

Some were marked by the absence of a solid business base or by speculative interests of the coast, most of the excess, if not delirium, in an almost isolated land by road and rail, marked by emigration and low national per capita income. Knowing or reviewing our recent history, the long struggle to provide permanent infrastructures to the volatile demand of the audiovisual industry that comes to the province's stages, is essential to not repeat the same mistakes and fall into more nonsense.

The need for soundproof and well-conditioned film studios for indoor shooting became apparent in the early 1960s.

It was Sergio Leone in 1966, while recording "The Good, the Band and the Ugly", who advised the possibility of building some studies, according to José E. Martínez in his book "Riding Towards Adventure. Almería and the Film Industry ", although it is to be assumed that this lack could previously not affect an indeterminate number of the more than 90 productions shot until then, with an average stay of 13 days. First, it was necessary to promote the creation of facilities that would allow the filming of interiors.

The way forward was to encourage the private sector in the field of economic policy dictated by the Government. The necessary investment for soundproofed studios, no matter how small they are, with internal endowments for lighting, scenography, carpentry workshops, plaster, warehouses, development training, a viewing room, was and is high, both in civil works and technical equipment.

At the time of the second development plan, with an average growth of 7.7% in gross domestic product, the ideal mechanism was the declaration of the industry of preferential interest. This implied an indisputable series of economic advantages, such as the reduction of up to 95% in all state or local taxes and up to 75% in customs tariffs, compulsory expropriation of the necessary land, if not the cession by the municipalities as well as freedom to amortize assets and low interest loans.

In July 1969 the Decree declaring Preferential Zone as an industrial location for cinematographic companies established in Almeria was finally achieved. Three months later the ministerial order came out where a contest of promoter companies was opened. There were 6 companies that offered projects as diverse as Almeria S.A. with an investment of 59 million pesetas or Sofima Española S.A. with 1,581 million, equivalent to more than 8 and 218 million euros today. This contest was declared void for not fulfilling the conditions of any of the 6 companies.

In 1971 a new contest was called again. The technical, social and financial requirements are set, with maximum and minimum investment ceilings. Again it was declared deserted. Once again the expectations went to the bottom. It gave the feeling that it was now or never, if they did not take advantage of the enormous aid and exemptions provided by the Ministry of Industry. For J.E. Martinez the reason was "that he did not want Almería. This new work aroused many envies in Madrid who could not allow the entire film industry of the country to end up in this province." But if we analyze carefully the sources we realize, for example, that all the proposals lacked a solid market study or a sustainability plan. Some of them were located in coastal areas with great potential to achieve high capital gains (The Toyo area, Playazo de Rodalquilar or Cabo de Gata).

The only promoter that was presented to the two calls was an investment group with a company called Almería Cine Luz S.A., which was not even constituted in the first call. However, it was presented with a macro project that, in addition to ambitious studies of 6 sets, included a treatment plant, an urbanization in Cabo de Gata and a toll road to Vera or Puerto Lumbreras with a total investment of about 7,000 million ptas ., equivalent today to 969 million euros.

The company is constituted in a public deed 14 days before presenting the documentation for the second contest. It was Cañí Spain, where the vertiginous growth, the rapid profits, had created a culture of pelotazo, which decades later would return vigorously.

According to the film historian Ignacio Fernández Mañas, apart from the beginning of the unstoppable decline of filming in the province, just in 1969 there arose as a bomb "El Caso Matesa, which explodes all this development policy of aid to companies. There it was seen that there were deceptions and frauds "that directly affected the cinematography, already touched by the institutional debt to the 230 million producers, as well as the closure of Banco de Crédito Industrial, which granted the credits to Spanish cinema. It also generated a governmental change, with the departure of Fraga to London. "The substitute was not interested in that support and from the Government, adventures like these stopped," says Fernández Mañas.

One of the greatest local defenders of the cause was the Delegate for Information and Tourism, Rafael Martínez de los Reyes. This is concluded in a report to the Ministry in April 1974, after consulting numerous professionals, who here "is coming to shoot outdoors, while in some countries the shooting is prioritized by the Government", arguments in which Fernández Mañas agrees. He ends his analysis with another characteristic common some years later: "It can be said that the professionals" really "were not interested in the contests, having only interested the speculators".

What followed to the present is more of the same, despite the persistent decline in the number of shootings. From the record year of 1968, with 42 productions, a decline begins until 1980, with an average of 8 shoots per year. From then until now everything has been new attempts, new expectations, new frustrations.

The exception arose to initiatives of professionals of the sector with the Baquero Studies (1969-1973) located in Avda. Montserrat, in the same building where the writing of this newspaper was. In 1991 they met in the conference "Almería, Tierra de Cine" recognized professionals and local living forces to take up the issue. A year later the United Cinema & Communications (UCC) projected the construction of studios in Viator that did not materialize either.

Equal luck ran the Private Society Almería Land of Cinema between 1994-95; the City of Cinema a few years later; the studies in the Congress and Exhibition Center of Campohermoso in 2010 or the Congress Center in Aguadulce in 2015. That same year the so-called Cinema Table was constituted in the University, formed by institutional representatives of different political signs, professionals and associations for the promotion of cinema in Almería, which includes, among other important objectives, the creation of studios to record indoor and aquatic scenes.

There seems to be consensus on the need to reinforce the supply of infrastructure and services to the audiovisual industry that visits us. The differences arise in the model, the dimension and the way forward. For Fernández Mañas Almería "has a large studio, possibly one of the largest in the world outdoors. Add that the line to follow is to care for, protect, promote and disseminate those studies."

Regarding the infrastructure for interiors, he affirms that, after having consulted with producers and art directors, the opinion is that a small study is needed, not very large, as well as complementary facilities (workshops, warehouses).

Almería director and producer Manuel Martínez Cuenca the convocation of the Junta de Andalucía for a feasibility study seems a positive initiative. Regarding the construction of studios, think that it has to be done with prudence, taking into account the size and extent to which the market is able to absorb the fluctuating demand. He remembers his activity as a teacher at the Audiovisual School of Ciudad de la Luz in Alicante and how he saw that there was no production to cover the offer. It considers that the new platforms associated to the audiovisual can generate a rebound or sustainability of the activity and create new expectations of workload in the sector.

The feasibility study contest for a Film City in the province appears as a basic and indispensable initiative before any possible decision, while it may reduce somewhat the uncertainty associated with a sector as volatile as the audiovisual sector.

For the first time, an independent market research, economic-financial viability, sustainability study will be carried out, as well as an internal and external analysis of its weaknesses, threats,
strengths and opportunities, which will outline the design and magnitude of the facilities necessary for, as the call states, "to avoid the reproduction of similar projects of cinematographic installations, whose cost or subsequent operation and maintenance have been unworkable".
Posted by Tom B. at 5:57 AM