Who Are Those Guys? ~ Frank Butler 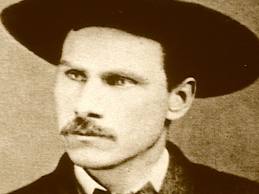 Francis E. "Frank" Butler was born in County Longford Ireland on January 30, 1847. He moved with his family to the United States at the age of 13. He initially worked a series of odd jobs, including one as a glass blower while living near Camden, New Jersey. Butler married Henrietta Saunders around 1870 and had two children, Edward and Katie. The two divorced a few years later.

Butler eventually developed a shooting act and toured with variety shows. After meeting at a shooting competition in Cincinnati, Ohio, Butler married Annie Oakley on August 23, 1876, although Butler would later claim the date as June 20, 1882. They developed their shooting act in 1882 when Oakley stood in for Butler's sick partner. In 1884, the Butlers joined the Sells Brothers Circus, and from 1885 to 1901 were a fixture on Buffalo Bill's Wild West Show. As Oakley became the star attraction, Butler became her manager and wrote articles and press releases. Oakley said that the financial part was always in her husband's hands. Oakley returned to performing between 1911 and 1913 with Vernon Seaver's "Young Buffalo Show", with Butler again as her manager. Butler also worked as a representative of the Union Metallic Cartridge Company and as a salesman for the Remington Arms Company.

After they retired, Butler and Oakley had brief residencies in New York City and Nutley, New Jersey as well as Cambridge, Maryland, and Pinehurst, North Carolina before returning to Ohio.

Oakley died on November 3, 1926 in Greenville, Ohio. Biographer B. Haugen reports that Butler stopped eating after his wife's passing, which caused his own death from starvation eighteen days later, on November 21, 1926. However, according to Shirl Kasper, the death certificate said that he had died of "Senility". Butler was living with Oakley's younger sister, Hulda Haines, in Ferndale, Michigan at the time of his death.

The musical Annie Get Your Gun is loosely based on the lives of Annie Oakley and Frank Butler. Ray Middleton originated the role of Frank in the musical opposite Ethel Merman as Annie, Howard Keel starred in the film version opposite Betty Hutton, Bruce Yarnell played Butler in the 1966 Lincoln Center revival of Annie Get Your Gun, with Ethel Merman again as Annie Oakley and Tom Wopat played the role in the 1999 Broadway revival. In 1957, a television production starring Broadway legends Mary Martin and John Raitt was broadcast on NBC.