'Blindman': The Story Behind a Drunk Beatle's Spaghetti Western


How a depressed Ringo Starr ended up in oddball horse opera about a sightless gunfighter – and why it's a must-see for Beatles fans. 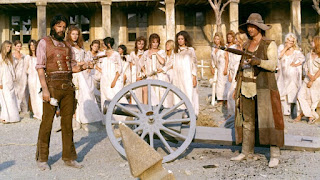 When Paul McCartney shocked the world in April 1970 with his announcement of the Beatles' break-up, drummer Ringo Starr added a surprise of his own by becoming (initially, at least) the most musically active member of the former Fab Four.

After five decades, the happy-go-lucky sidekick in the greatest band of all time is finally getting his solo moment in the sun

As he would later recount in the lyrics of "Early 1970," the deceptively jaunty B-side of his 1971 hit "It Don't Come Easy," Starr was the only Beatle who didn't have any serious beef with any other member of the band at the time. Feeling lost without the family dynamic of the musical entity that had completely consumed the previous eight years of his life, he tried to distract himself from the pain by playing as much music as possible. In addition to releasing two solo albums (Sentimental Journey and Beaucoups of Blues) and two non-LP international hits ("It Don't Come Easy" and 1972's "Back Off Boogaloo," both produced by George Harrison), the musician spent his first two post–Fab-Four years playing drums on recording sessions for Harrison, John Lennon, Yoko Ono, Stephen Stills, Leon Russell and several other artists.

Still, Ringo felt adrift. Unsure of what else to do with himself, he continued to pursue his rather unorthodox film career, which had begun with Beatles vehicles (Walter Shenson, who produced 1964's A Hard Day's Night and 1965's Help!, called him "a superb actor, an absolute natural") and expanded to include parts in such cult films as 1968's Candy and 1969's The Magic Christian. In February 1971, Ringo took the role of Frank Zappa stand-in Larry the Dwarf in 200 Motels, Zappa's surreal comedy about the life of a rock band on tour. But the ex-Beatle yearned to expand his range beyond comedic parts. Which is how, four months later, he found himself traveling to Almeria, Spain, to play a cowboy in Blindman, a Spaghetti Western directed by Ferdinando Baldi.

This wasn't the first time Starr had been to Almeria, a city whose arid outskirts doubled as North American deserts in hundreds of European-produced Westerns, most famously Sergio Leone's The Good, the Bad and the Ugly. Five years earlier, he had visited John Lennon there while his bandmate was filming How I Won the War with Richard Lester. (Lennon famously wrote "Strawberry Fields Forever" during that film's production.) This time, however, he was in the company of Allen Klein, the tough-talking American lawyer whose controversial tenure as the group's manager had led directly to McCartney's exit from the band. Klein, who was co-producing Blindman for his company ABKCO Films, thought Starr would be perfect for the part of Candy, a lovelorn outlaw whose obsession with a rancher's daughter ultimately leads to his own demise. (The fact that his character bore the name of the titular heroine of Terry Southern's satirical novel, the adaptation of which Ringo had just appeared in, was completely coincidental.)

Briefly released in the US in early 1972, and not released in the UK until late 1973 in a severely censored version, Blindman had ultimately little impact on Ringo's acting career. But ABKCO's new reissue of the movie (which has been mastered from its original 35 mm negative, and was released November 4th in DVD and digital download formats) offers folks a welcome opportunity to re-appraise the once-obscure cult film in all its restored Techniscope glory.

A gritty tale of double- and triple-crossing in the white slavery trade of the old west, Blindman stars American actor Tony Anthony in the title role of the sightless bounty hunter who – with a little help from his friends, namely a trusty seeing-eye horse – must take on bloodthirsty bandits and the Mexican Army in his quest to deliver 50 mail-order brides to hard-up miners in Texas. Blatantly based upon the itinerant blind swordsman of Japan's popular Zatoichi films, Anthony's character gives new meaning to the term "dead-eyed shot"; he only needs to be pointed in the general direction of a town's church steeple in order to ring its bell with a rifle blast.

Betrayed by his business partner, who has already sold the women to a gang led by the ruthless Domingo (Lloyd Battista) and his even more ruthless sister (Magda Konopka), Blindman follows his nifty embossed leather map of North America to Mexico, unaware that Domingo is already using the brides as bait with which to kidnap a Mexican general (Raf Baldassare). It's while tracking down Domingo that our antihero first encounters Candy, the criminal's none-too-bright younger brother who's busy trying to win the love of a woman.

Though he received second billing for obvious promotional reasons, Starr's role in the film isn't a major one; Anthony and Battista get most of the screen time. But it does leave a big impression, and Baldi makes the most of the Beatle's droopy features and naturally downcast expression, using lingering close-ups to draw out the sadness and confusion the drummer was undoubtedly still feeling over losing his day job. Given his proclivities at the time, it's also entirely possible that the musician’s soulful, thousand-yard stare was the result of an overindulgence in booze. Still, whatever the case, his palpable inner melancholy adds makes Candy — a deeply unsympathetic character who abuses and rapes the object of his affections — come across as more layered and conflicted than he probably seemed in the original screenplay (penned by Vicenzo Cerami with help from Pier Giovanni Anchisi and Anthony, a veteran of spaghetti Westerns who also co-produced the film with Klein and Saul Swimmer).

And Ringo acquits himself nicely in some solid action sequences: He shoots a poisonous snake, tortures Blindman, stabs an old rancher to death, and (spoiler alert) eventually meets his end in a cave, where the sight-impaired, sure-shot gunfighter confuses him with some well-timed dynamite explosions before putting some lead in the back. It's also no knock on his acting talents to say that his most memorable scene involves Candy's bizarre funeral, during which Domingo insists that his brother is still alive – "He likes dancing! And drinking! And pretty women!" – and will thus marry Pilar from his coffin, whether she likes it or not. The surreal ceremony takes place against the haunting backdrop of an adobe village where all the buildings are painted either jet-black or ivory white, and the black of the mourners' garments contrast equally starkly with the white of the priests' robes.

Filmed both in Spain and at the legendary Cinecitta Studios in Rome, Blindman features more lavish sets than are typical for the genre, probably because of the money that Klein and ABKCO were pumping into the production. (The newly restored version of the film does ample justice to Riccardo Pallottini's gorgeous cinematography.) Klein himself makes an un-credited appearance in one of the early scenes; the irony of him playing a sweaty, double-crossing bandit will not be lost on anyone who recalls the music mogul's reputation for unethical business practices. Former Beatles road manager Mal Evans appears in the same scene as one of Klein's grimy, rifle-toting cohorts, though the meta-reference regarding his role is sadder  — five years later, while drunk, depressed and under the influence of valium, Evans would make the fatal mistake of pointing an air rifle at three members of the LAPD.

It's also blessed with an excellent score by underrated Italian film composer Stelvio Cipriani, best known by film nerds for his work on early 1970s Mario Bava horror films (Twitch of the Death Nerve, Baron Blood) and his music for the 1977 killer-octopus film Tentacoli, parts of which were excerpted for the soundtrack of Quentin Tarantino's 2007 exploitation-a-go-go film Death Proof. Cipriani's score splits the difference between eerie spaghetti Western twang, operatic exultations and groovy, turn-of-the-decade psychedelia. The only thing missing from the soundtrack is Ringo's song, "Blindman"; recorded shortly after he returned to England from Spain, with the help of Klaus Voormann and Badfinger's Pete Ham, the song was reportedly rejected for use in the film, probably because its dirge-y sound clashed musically with Cipriani's vivid sound paintings. It later appeared on the flip side of "Back Off Boogaloo," where lyrics like "Blindman with your piece of paper/What you gonna do?" inevitably puzzled the hell out of listeners who'd never seen the film, or even knew of its existence.

Though obviously not the finest entry in the Beatles-related filmography — it can't touch A Hard Day's Night, but it's also certainly several leagues above Give My Regards to Broad Street — Blindman remains a fascinating artifact from the period where he was still trying to come to grips with life after the Fab Four. For fans alike, it's well worth a look.