Who Are Those Guys? ~ Victor Buono 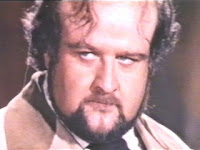 Victor Buono was born in San Diego, California on February 3, 29138. The son of Myrtle Belle (née Keller; 1909–1979) and Victor Francis Buono (1907–1981). His maternal grandmother, Myrtle Glied (1886–1969), was a Vaudeville performer on the Orpheum Circuit. When he was a boy, she taught him songs and recitations and encouraged him to perform for visitors. Even though the young Buono enjoyed the polite applause of those captive audiences, he aspired to be a doctor. When he was sixteen, Father John Aherne, OSA, of St. Augustine High School in San Diego cast him as Papa Barrett in the play “The Barretts of Wimpole Street”. Buono appeared in three plays a year during high school, including “Aladdin and His Wonderful Lamp” and Shakespearean dramas such as the play “Hamlet”. Buono played the role of King Claudius.

He started appearing on local radio and television stations, and at the age of eighteen joined the Globe Theater Players in San Diego. The director had confidence in Buono and cast him in “Volpone”, “A Midsummer Night's Dream” and other Globe presentations. He received good notices for his various Shakespearean roles and in modern plays such as “The Man Who Came to Dinner” and “Witness for the Prosecution”.

In the summer of 1959, a talent scout from Warner Bros. saw the heavy-set Buono play Falstaff at the Globe and took him to Hollywood for a screen test. Buono made his first network TV appearance playing the bearded poet Bongo Benny in an episode of ‘77 Sunset Strip’. Over the next few years, he played menacing heavies in nearly every Grade "A" private eye series on TV and also appearing on ‘The Untouchables’. After appearing in a few uncredited film roles, he was cast by director Robert Aldrich in the psychological horror movie “What Ever Happened to Baby Jane?” (1962). The film starred Bette Davis and Joan Crawford, and Buono played the part of the ne'er-do-well musical accompanist, Edwin Flagg, a performance for which he was nominated for the Academy Award for Best Supporting Actor and the Golden Globe Award for Best Supporting Actor – Motion Picture.

In 1980, Buono played the millionaire father of memory-impaired Reverend Jim Ignatowski on ‘Taxi’. Buono died before the end of the series and another actor briefly assumed the role. The character was eventually killed off, followed by an episode where Jim learns to cope with his father's death.

In 1980, Buono appeared in the TV movie ‘Murder Can Hurt You’ as Chief Ironbottom, a parody of the title character from Ironside. His later roles were more of pompous intellectuals and shady con men, although he also played straight roles. In the miniseries ‘Backstairs at the White House’ (1979), he portrayed President William Howard Taft.

Buono was found dead at his home in Apple Valley, California, on New Year's Day 1982; he died of a sudden heart attack. He is entombed with his mother Myrtle in Greenwood Memorial Park in San Diego, but his name is not inscribed on the crypt.