November 25th marks the 40th Anniversary of the Italian premier of Enzo Castellari’s “Keoma”. One of the last significant Euro-western films. The story revolves around a half-breed Indian, who returns to his native country after having fought in the Civil War. Unfortunately the situation is much changed: the town is in the hands of the evil Caldwell and everyone is against him except his stepfather and an old Negro friend named George. With the help of both the as Keoma tries to return things as they were before his departure, but he must face-off with his stepbrothers. A situation that hasn’t changed since their childhood as Keoma has never been accepted by them and they’ve always felt he was loved by their father more then they were.

A celebration of the film and its 40th anniversary was held in Turin, Italy on February 16th with a showing of the film followed by a question and answer session. 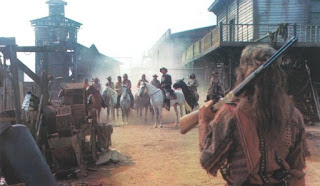 After the Civil War, ex- Union soldier Keoma Shannon, part-Indian and part-white, returns to his home town to find his half-brothers in alliance with a petty tyrant named Caldwell. Caldwell and his gang rule over the town with an iron fist. With the help of his father and George, an old Black friend, he vows revenge. Keoma also shows compassion when he saves a pregnant woman from a group sent by Caldwell's group to be quarantined in a mine camp full of plague victims. Keoma is constantly visited by the apparition of an older woman ("The Witch") who saved him during the massacre of an Indian camp.