We continue to our search for filming locations for the 1966 film “Navajo Joe”. The scene shifts to the approaching train and Duncan’s gang making preparations for the robbery. 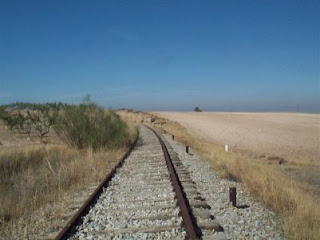 The robbery was filmed in the Gaudix area where the tracks were used in several films including “Duck You Sucker”, “7 Pistols for the MacGregors” and several others.