We continue our search for filming locations for the 1966 film “Navajo Joe”. After seeing his wanted poster mounted on the side of the Golden Garter Saloon Duncan decides to investigate and turn the tables on the town. He and his men enter the saloon and harass the bouncer manning the ‘Check Your Guns’ counter. A dance routine is in progress where the banjo player shoots the large balloons held by the three dancers with his bow and arrow. Instead Duncan announces his presence by shooting the balls with his six-shooter. Duncan sends his men out to terrorize the town. Finally the sheriff appears and tells Duncan he’ not welcome in Esperanza. The scalps he brings in to sell are no longer renegades and troublemakers but peaceful men, women and children. The sheriff arrests Duncan for murder and tells him to come along to the jail. Duncan’s brother and another henchman shoot and stab the sheriff and his deputy, killing them. Suddenly a man in the shadows speaks up and Duncan recognizes him and is told by the man he’s now a doctor and has married the daughter of the banker Blackwood. The doctor tells Duncan of a shipment of half a million dollars on train coming to Esperanza. If Duncan and his men hold-up the train he’ll split the money with them because he knows the combination to the safe. Overhearing the conversation is the dance troupe and they make for their small wagon and flee Esperanza. Duncan sends several of his men after the troupe. 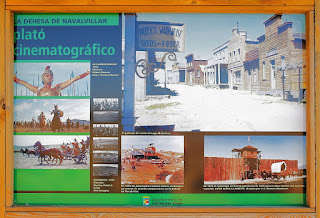 The scene was filmed in Colmenar Viejo, Spain where a plaque and an observation deck is now located displaying several photos and location pictures of the films once shot in the area.

For a more detailed view of this site and other Spaghetti Western locations please visit my friend Yoshi Yasuda’s location site: http://y-yasuda.net/film-location.htm and Captain Douglas Film Locations http://www.western-locations-spain.com/
Posted by Tom B. at 5:55 AM