RTL reveals the true identity of Old Shatterhand at Christmas 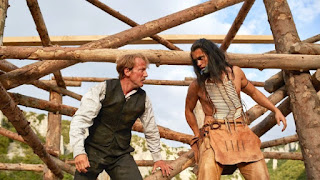 RTL restores the legend of Winnetou and Old Shatterhand. At Christmas, a mystery around a main character will be aired.

Through the Wild West of the USA in the 1860s, writer Karl May is also making his debut in the upcoming television films. RTL also reveals the true identity of its main character, Old Shatterhand, in the films. But as in previous film adaptations, May acts not only as a narrator in the background, but is also seen in the film.

From the teacher to the whistling hero.

This transformation of the teacher Karl May to the fighter at the side of the Indian Winnetou is now told by RTL. The station shows how May rides into the Apache region, is captured by the Indian Winnetou and finally becomes the "old man with the mighty fist".

What is missing in the film are historically documented scenes about Karl May. For example, Karl May had made advertising shots of himself in the cowboy gear. He also wrote letters in which he claimed to have opposed the readers of Old Shatterhand.

Only in some places is Western scenery blinding

While RTL is omitting historical facts about Karl May, the radio shows go into detail about the "Old Shatterhand legend". Thus they put the viewer into a state of entertaining mental disregard. At the beginning of the story, Wotan Wilke Möhring can still be seen with a stately mustache, as one Karl May bore him. More and more, however, he changes to the fighter Shatterhand, which has as smooth a face as a polished revolver.

In some places, however, the Western scenery is crumbling. For example, when Winnetou (Nik Xhelilaj) comes to Western American coastal cities it looks a bit too much like the Croatian Adriatic coast.

But by the well-known music as well as by the high-ranking occupation with Jürgen Vogel, Wotan Wilke Möhring and Mario Adorf delivers a real western mood.