Westworld in the east: Inside the abandoned Japanese theme park featuring Clint Eastwood and Mount Rushmore replicas that remain frozen in time

Western Village, in Nikko, Japan, has been abandoned since 2007 after it was closed for maintenance
The attraction had once been a film set but now bottles of unfinished booze sit on its dust-covered shelves
Today, the largely forgotten theme park looks like it could be the setting of the 1973 horror film Westworld. 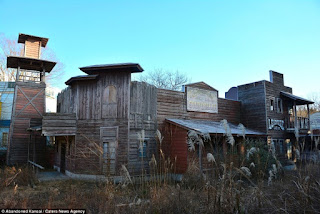 Japan, a country often associated with its serene temples and cherry blossoms, is probably the last place you'd expect to find a replica of the Wild West.

But in Nikko, a city about 70 miles north of the capital Tokyo, there is a multi-million dollar theme park featuring replicas of Clint Eastwood and Mount Rushmore.

The eerie attraction has been abandoned since 2007 and now looks more like the set for the 1973 horror film, Westworld, where robotic androids took over a theme park.

Western Village had once been used as a film set as well as being a Wild West-inspired theme park.

The attraction originally opened in the 1970s and in 1995, developers added a new section at a cost of $25million (£19.26million), which featured a replica of Mount Rushmore.

In 2006, the park announced it would be closed from December 6 until late March 2007 for maintenance, but it never opened again. 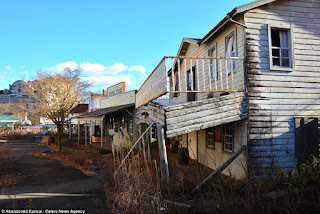 Today, there are still beers and half-empty bottles of Grand Marnier on the dust-covered shelves, dating back to when the park closed its doors nearly a decade ago.

Inspired by the new HBO series Westworld, which is based on the original film and stars Anthony Hopkins, and his love of Westerns, German expat Florian Seidel decided to visit the attraction.

The 39-year-old said: 'There was so much to discover - not only the village with all the shops and restaurants, but also that rather new large building with the Mount Rushmore replica on the back.

'The ground floor especially was fascinating with the playground area and the selection of imported American beers - and the human-sized teddy bears.

'It was a bit creepy at times, like when you enter a building and see a Clint Eastwood replica sitting behind a desk.'

The Osaka-based translator visited the park in 2015, after the announcement was made that the attraction would be demolished.

Seidel wrote in his blog about how the park had once been a huge hit before being abandoned.

He said in an interview: 'It fell into disrepair, which is a shame as Western Village was often used as a film set for promotional videos and movies.

'As a child I loved the comedy Spaghetti Westerns with Bud Spencer and Terence Hill.

'I remember watching the Westworld movie as a teenager.

'I had heard about the TV show reboot, and deserted theme parks are among my favorite abandoned places, so this exploration was right up my street.'

HBO's Westworld was released on October 2.