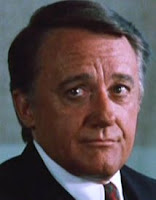 He’ll be best remembered for his role as Napoleon Solo, television’s answer to James Bond. Uncle which aired from 1964-68, and paired Vaughn’s elegant, dark-haired Solo with David McCallum’s blond Russian Illya Kuryakin, an early example of Cold War detente in the battle against global evildoers., died in Danbury, Connecticut on November 11th. He was 83. Born Robert Francis Vaughn in New York City on November 22, 1932, he also had early roles in “The Young Philadelphians” (1959), for which he was nominated for an Academy Award for Best Supporting Actor and a Golden Globe Award for Best Supporting Actor – Motion Picture, and played Lee gunman in “The Magnificent Seven” (1960). He also appeared in the 1998-200 TV series ‘The Magnificent 7’ as Judge Oren Travis. His lone Euro-western role was as Lawson in the 1987 Terence Hill modern day western “They Call Me Renegade”.
Posted by Tom B. at 11:26 AM