We continue our search for filming locations for the 1966 film “Navajo Joe”. After overhearing the plans of the doctor and Duncan to rob the train of half a million dollars, the Chuck and the girls make a run for it in the their wagon chased by three of Duncan’s henchmen. One of the men uses a bolo to trip one of the horses and tip over the wagon.

This scene was filmed on the prairie in Colmenar Viejo. 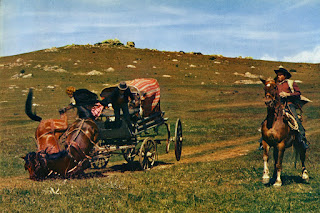