Who Are Those Guys? ~ Laurence Burton 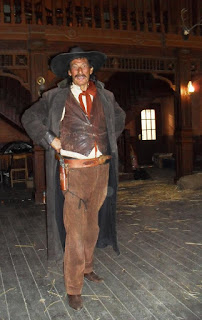 Laurence Burton was born in London, England in 1944. He spent 20 years in diverse employment before becoming a Global traveler seeking solutions to the Worlds dilemmas.

During a Shamanic Path Vision Quest in the Sinai, Laurence discovered the secrets of Gyroscopic Propulsion.

To bring this dream into a reality he became involved in the study of physics, engineering and electro magnetism to build a practical working model to prove that we do not need combustible fuels for propulsion.

Wondering how the world has reached the state it is in, has lead him to study of human movement through genetics, politics, religions and the building of Empires. His studies conclude that our human species is now capable of reaching harmonic balance to create a world at peace.

He currently runs a workshop on alternative living and engineering and self-discovery in the desert of Tabernas in the South of Spain.

Laurence became a character actor to support his lifestyle and has appeared in several Euro-westerns since 2000.