Riding shotgun! Clint Eastwood, 86, dons his original Man With No Name poncho to kick off Carmel centennial celebration on a stagecoach 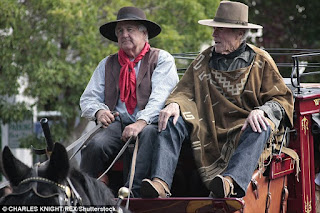 That means the beautiful ocean-side city in California is only 14 years older than the Hollywood star who helped to make it famous.

One-time mayor Clint Eastwood turned out to help celebrate its centennial on Saturday, a few days ahead of its official October 31 incorporation date.

he legendary 86-year-old actor-turned-director dressed as one of his most famous characters, The Man With No Name, from the trilogy of spaghetti Westerns directed by Sergio Leone that kicked off with A Fistful Of Dollars in 1964.

And he even wore the original poncho from the films as he climbed aboard the stagecoach to ride shotgun and lead the parade as Grand Marshal.

The veteran added to his Western look with a heavy grey shirt, blue jeans, brown leather boots complete with spurs and a cowboy hat over his grey hair.

All he was missing from the No Name part was the cigar that he continually  chewed throughout the movies.

Clint once lived in Carmel and was elected mayor, with a whopping 72.5 per cent majority, when he stood in 1986 on a ticket of reducing bureaucracy.

During his tenure he made it easier to build or to renovate property, saved the land around the Mission Ranch which was earmarked for 80 condominiums and opened the library annex dedicated for children's use, according to his website.

Clint served for two years before returning to his film career.

The iconic star now lives in Sun Valley, Idaho, and is still a major force in Hollywood.

His most recent movie as a director, Sully, was released last month.

It starred Tom Hanks as pilot Chesley Sullenberger, who became a hero after landing his damaged plane on the Hudson River to save the flight's passengers and crew.