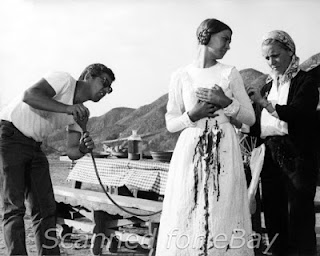 For years in the credits for “Once Upon a Time in the West” the role of Maureen McBain was listed as Marilu Carteny. If you put Carteny’s name in IMDb you’ll find she is listed as a costume designer, production designer and actress going back to 1950. If this were to be correct than she was designing clothes when she was a toddler as she plays a late teenage girl a Maureen McBain. The correct identification is that Maureen was played by Simonetta Santaniello whose brother Santaniello played the role of Timmy McBain. Both actors re-appeared in “Ace High” as the children of the Irish farm family. Both Enzo and Simonetta are the children of producer, director Oscar Santaniello.


The photo above is correctly labeled as Simonetta Santaniello and Marilu Carteny. Carteny did appear in “Once Upon a Time in the West” as one of the mourners at the McBain funeral.
Posted by Tom B. at 3:31 PM