Who Are Those Gals? ~ Geneviève Bujold 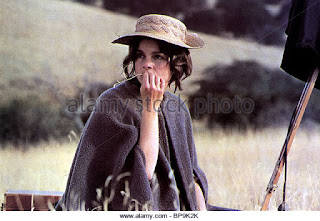 Geneviève Bujold was born in Montreal, Quebec on July 1, 1942, the daughter of Laurette (née Cavanagh) and Joseph Firmin Bujold, a bus driver. She is of mostly French Canadian descent, with more distant Irish ancestry. Bujold received a strict convent education for 12 years before entering the Montreal Conservatory of Dramatic Art, where she was trained in the classics of French theatre. She made her stage debut as Rosine in “Le Barbier de Séville” in 1962.

She got her first major break in 1965, while on tour with the company of the Théâtre du Rideau Vert in Paris, when French director Alain Resnais selected her for a role opposite Yves Montand in his film “The War Is Over”. She stayed in France to make two more films: Philippe de Broca's “Le Roi de cœur”, opposite Alan Bates, and Louis Malle's “Le Voleur”, opposite Jean-Paul Belmondo.

She also appeared in Michel Brault's film “Entre la mer et l'eau douce” (1967) and Claude Jutra's film “Kamouraska” (1973), based on a novel by Anne Hébert, for which she won her third Canadian Film Award for Best Actress.

Bujold appeared in a variety of roles for Canadian and U.S. television, notably for NBC's Hallmark Hall of Fame in George Bernard Shaw's ‘Saint Joan’ in 1967, which earned her an Emmy Award nomination, and ‘Caesar and Cleopatra’ in 1976, opposite Sir Alec Guinness. She also appeared in Jean Anouilh's ‘Antigone’ for PBS's Great Performances in 1974.

International recognition came in 1969, when she starred as Anne Boleyn in Charles Jarrott's film “Anne of the Thousand Days”, opposite Richard Burton. For her performance, she won a Golden Globe Award as Best Actress in a Leading Role, and earned an Academy Award nomination in the same category. The following year, she played the role of the visionary Cassandra in Michael Cacoyannis's film version of “The Trojan Women”, opposite Katharine Hepburn, Vanessa Redgrave, and Irene Papas.

Bujold was touted to become a star, but she walked away from her contract with Universal Studios. The resulting lawsuit was settled when she agreed to appear in the 1974 disaster film “Earthquake”, opposite Charlton Heston, and the 1976 adventure film “Swashbuckler”, opposite Robert Shaw. In the ensuing years, she appeared in “Obsession”, opposite Cliff Robertson (1976); “Another Man, Another Chance”, opposite James Caan (1977); “Coma”, opposite Michael Douglas (1978); “Monsignor”, opposite Christopher Reeve (1982); and “Tightrope”, opposite Clint Eastwood (1984). In addition, Bujold also appeared in the 1980 Walt Disney film “The Last Flight of Noah's Ark” opposite Elliott Gould and Ricky Schroder. She formed a professional friendship with director Alan Rudolph, and appeared in three of his films: “Choose Me” (1984), “Trouble in Mind” (1985), and “The Moderns” (1988). She also appeared in David Cronenberg's psychological horror film “Dead Ringers” (1988), opposite Jeremy Irons. After a long absence from Quebec, she returned to appear in two films directed by Michel Brault; “Les Noces de papier” (1989) and “Mon amie Max” (1994). A few years later she was back to Quebec once again to play the role of Madame Lasalle in “La Turbulence des fluids” (2002), directed by Manon Briand.

In 1994 Bujold was chosen to play Captain Elizabeth Janeway (subsequently renamed to Captain Kathryn Janeway), lead character in the ensemble cast of the American television series ‘Star Trek: Voyager’. However, she dropped out after filming just a few scenes of the first episode, citing the lengthy work schedule for a TV series and her unwillingness to do news interviews. The producers subsequently hired TV veteran Kate Mulgrew for the role.