Stranded by a sandstorm in the Gila desert, a youngster is rescued by the Yuma Indians who take him into their care. Adopting the name Wind of Death, the Yuma Kid returns to his own world after hearing the prophecy of Wa-No-Tah, the witch who lives with her cougars in a cave.

The Yuma Kid adventure stories were written by Giovanni Luigi Bonelli and artistically drawn by Mario Uggeri. The series ran for 18 issues in 1953. 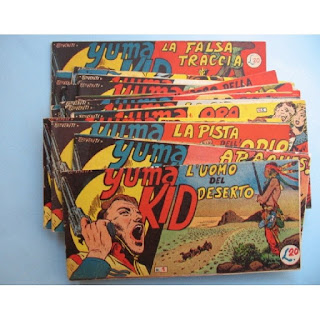 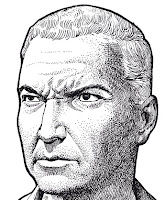 The late lamented Giovanni Luigi Bonelli, a prolific script, considered as the Patriarch of the Italian comic strip, will forever be remembered in connection with Tex Willer, a character created in 1948 for the publishing house L'Audace, the ancestor of the present-day Sergio Bonelli Editore. Giovanni Luigi Bonelli wrote the stories of all of the Tex adventures published until beyond the mid-1980s. Born on 22nd December 1908 in Milan, Giovanni Luigi Bonelli started by contributing a series of poems to the "Corriere dei Piccoli", followed by a few works that appeared in the "Giornale illustrato dei viaggi" published by Sonzogno. In the same period, he wrote three adventure novels: "Le Tigri dell'Atlantico", "Il Crociato Nero" and "I Fratelli del Silenzio". After these initial experiences, he entered into the comic strip world by supervising a series of journals and magazines on behalf of Lotario Vecchi, which were published by the Saev Press of Milan. His name appeared in "Primarosa", "L'Audace", "Rintintin" and "Jumbo" and between 1937 and 1939 he became the most important plot of "Il Vittorioso", a weekly publication. When "L'Audace" was taken over by Mondadori, Bonelli continued to work for this team until 1939, the year in which he became its publisher. After the war he resumed his activity by working for small presses until 1947. Then he undertook a joint project with Giovanni Di Leo, setting up a series of activities among which the expansion of the "Cow Boy" weekly and the translation of the French publications "Robin Hood" and "Fantax", produced by Pierre Mouchot's studio. In the meanwhile, in 1946, he wrote "La Perla Nera", a short tale illustrated by Franco Caprioli; followed in 1947 by "Ipnos" with artwork by Gino Cossio, Paolo Piffarerio, Guido Dapassano and Mario Uggeri.

1948 saw the advent of "Occhio Cupo" and Tex, both illustrated by Galleppini, and "Pattuglia dei senza paura" with artwork by Zamperoni and Donatelli. "Il giustiziere del West" was published in the same year and rendered graphically by Giorgio Scudellari. In 1949 Giovanni Bonelli wrote the short series "Plutos" for Leone Cimpellin; 1954 was the year of "Il Cavaliere Nero" illustrated by EsseGesse and "Yuma Kid", rendered by Mario Uggeri. One year later, "I tre Bill" was created, with three illustrators contributing, at different times, to the artwork, Giovanni Benvenuti, Gino D'Antonio, Roy D'Ami and Renzo Calegari. Also created in that same year was "El Kid", illustrated by Dino Battaglia, Gino D'Antonio and Renzo Calegari. "Davy Crockett" was created in 1956, with artwork by Renzo Calegari and Carlo Porciani. "Hondo", illustrated by Franco Bignotti and "Kociss" and illustrated by Emilio Uberti, dates from 1957. In 1962 Bonelli resumed and completed the long saga "Un ragazzo nel Far West", for which the subject was conceived by Nolitta. He continued to supervise the production of Tex until he passed away on 12 January 2001.