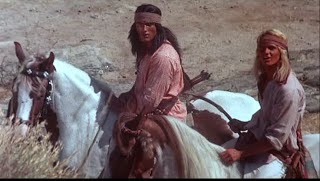 Deep in the Old West a small wagon train is attacked by bandits who kill the men, women and children, but just before they kill the last survivor, a group of Apaches arrive on the scene and kill the bandits. They rescue a woman who has survived and take her back to camp where she gives birth, but dies of her wounds. Her son is named Shining Sky and he is raised by White Bear the Apache Chief as his own son, alongside his son Black Wolf. The boys are inseparable as youngsters, but fall apart over the love of Rising Sun and as they fight for her, Black Wolf is accidentally killed. Shining Sky leaves the tribe to live with the white men but discovers that they are a vile bunch who plan to kill off the Apaches who are stopping them from settling in the territory. Finding rejection and persecution by the Whites he returns to the Apaches where he joins them in their fight against the white man’s intrusion of their tribal lands.