THE SHERIFF WAS A LADY 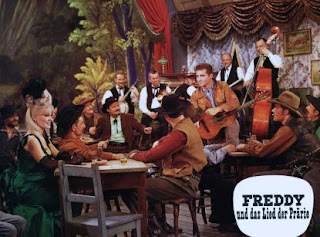 Bill Black is a mysterious avenger who rides through the prairie singing and fighting for the rights of the innocent. Nobody knows that it is John Burns, whose parents were killed by desperadoes. John aka Blackbeard Bill is on the way to the ranch of old Ted Daniels, where he grew up after the death of his parents. Ted, who knows of a legendary gold vein and has been kidnapped by bandits. Black Bill rides to the notorious gold mining town of Moon Valley to bring the unscrupulous criminals to justice. John does not realize that Ted's daughter Anita, who he last saw in childhood, lives there.

When Anita, posing as the sheriff's sister, because he is always drunk, is Deputy of Moon Valley and is now called Betty Wilson. Meanwhile, John makes acquaintance with a certain Steve Perkins, who rules like a despot in the town. His fiancée Olivia only recently learns that Perkins is also head of the infamous Moon Valley gang who has Ted Daniels as a prisoner the basement of the saloon.

By several coincidences Anita comes into possession of a pocket watch belonging to Ted Daniels and John knows it is a clue to the raid on the ranch. Olivia finds out that John Burns is Bill Black and reveals to Bill that Perkins is the head of the criminal gang. The next day, John spreads the rumor that he wants to leave town with Olivia. It provides a trap for Perkins and it develops into a dramatic chase. During a shootout Anita unexpectedly appears. She arrests John as Black Bill. While in prison in Moon Valley John admits his true identity to Anita. At the end John succeeds in freeing Ted and Steve Perkins is finally brought to justice.

YouTube Trailer: http://www.youtube.com/watch?v=cSDkshD2ME0
Posted by Tom B. at 6:48 AM