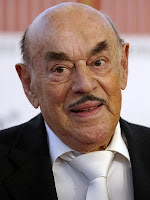 Abraham ‘Artur’ Brauner was born on August 1, 1918 in Łódź, Polen. A Polish film producer and entrepreneur, he was born to a Jewish family. With his parents and four siblings, he fled to the Soviet Union and survived the Holocaust. Following the war, he and his brother, Wolf Brauner emigrated to Berlin while his parents and three of his siblings emigrated to Israel. Twelve of his relatives were killed at Babi Yar, just a portion of the 49 who perished at the hands of the Nazis.

As a young man he saw Fritz Lang's film “The Testament of Dr. Mabuse” (1933) that affected him greatly, making him interested in film. In September 1946 he founded the Central Cinema Company or CCC Films in the American sector of Berlin. He produced “Sag' die Wahrheit” (1946), one of the first films produced in Germany after the war, followed by “Morituri” (1948), which was a commercial failure and threw him into debt. Brauner realized that to produce critically successful films he had to make up their losses by producing critically derided films that were appreciated by the public. He lured back many Germans who had experience in Hollywood such as Robert Siodmak and later Fritz Lang who started a revival of Dr. Mabuse.

In the 1960s Brauner produced nine Euro-westerns from “Old Shatterhand” (1964) to “Winnetou and Shatterhand in the Valley of Death” 1968).

Today we celebrate one of the great German producers Artur Brauner on his 95th birthday.