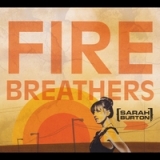 Despite the mixture of different genres, Burton sees herself more as a rock’n’roll singer who stays pretty folksy. To give you a better idea, she says a lot of people have compared her to Sheryl Crow.

Her latest album, Fire Breathers, was released in August 2012 and consists of 13 songs spun together by a spaghetti-western love story.

“Try to think of it as if it was like a soundtrack to a movie involving these three characters,” Burton said. “There’s the woman and basically she’s torn between the bad man and the good guy.”

ON singer-songwriter Sarah Burton earned critical praise for her debut EP, 2007's Love is for Pussies, and 2010's Mayflower. She ups the creative ante with this eclectic, but compelling release. Things start off in rockin' mode with "Raise the Bar" and the raunchy "Round Me Up," while country ("Tried Being Good"), blues and folk strains are audible later on. Burton's roots shine clearly on the final cut, a version of the traditional "Wayfaring Stranger" that breathes new fire into a well-covered classic. The other cover is the Low Anthem's "To Ohio," which is also done justice. Colourful characters and places in her original songs include outlaws, cowboys, the women who lust after them and drunken nights in Winnipeg. There's a slightly rough and ready feel to the instrumentation that suits Burton's vibrant and versatile vocals. She produced herself and recruited such fine guests players as Paul Reddick (his harmonica playing adds energy to a couple of cuts) and backing vocalists Andrea Romolo, Cindy Doire, Jenny Allen and Jadea Kelly. You get the sense they had lots of fun recording this very enjoyable disc.