An afternoon with Lee Marvin

I spent an enjoyable afternoon yesterday listening to some great stories about Lee Marvin at Gatsby's Books in Long Beach, California. Author Dwayne Epstein had some great and revealing information about the subject of his book Lee Marvin: Point Blank. My buddy John Crummett along with a few dozen other people had a truly fun time.

During the question and answer period we asked Dwayne about Lee’s Euro-western “The Spikes Gang” (1974). Dwayne said when producer, director Richard Fleischer first sent Marvin the script he turned it down. Richard called Lee and they met for lunch and discussed the project. Fleischer told Lee he envisioned the role of Harry Sparks as ‘The Devil’. Lee replied, “Yeah I can play that.” The film is filled with small quotes and dialog on Lee’s reflections on life. The film was shot in Almeria, Spain using Texas Hollywood as the main set. During the film Lee appears and disappears adding to the feeling that he’s more than just a mortal man.


Thanks Dwayne and continued success with the book. 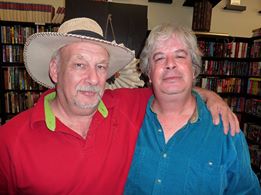 For more information on Lee Marvin: Point Blank see http://pointblankbook.com/
Posted by Tom B. at 8:26 AM