Almeria is hosting the filming of 'Six Bullets to Hell', a tribute to the 'spaghetti western directed by Tanner Beard and Russell Cummings. 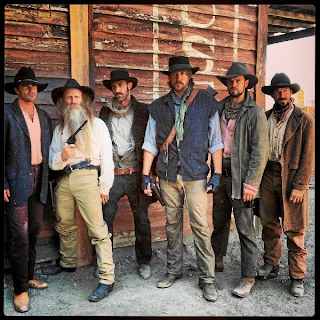 A city in the Far West. A farmer's wife is raped and murdered by Bobby Durango and his gang. This event will force Billy Rogers to dust off his old revolver and seek justice. Blood, sweat and revenge and sun, sun. A pure 'spaghetti western'.
This is the starting point of “Six Bullets to Hell” (“Seis balas para el infierno”), a co-production between Spain and the United States which was just shot in Tabernas and Abla. Tanner Beard and Russell Cummings are the directors and stars for Chip Baker Productions and Silver Sail Entertainment Films. The cast includes actors Spanish Canarian Spanish Magda Rodriguez (seen in “Fast & Furious 6”) and veteran Spanish Spaghetti western actor Antonio Mayans.
"It is a tribute to the 'spaghetti western' and the movies that put this region on the map," Beard says in a statement to La Voz de Almeria, whose also the executive producer of the film along with Danny Garcia and Cesar Mendez, organizers of The Almeria Western Film Festival, which will hold its third edition this October in Tabernas.
The town in the desert is Mini Hollywood and Fort Bravo and the Abla mountains were the natural settings for the feature. “Being able to shoot in the same sets where some of the classics that defined the genre is something that seems unreal. The landscape and mountains in Abla impressed me and also the sets. Being there is like being in a time machine,” says Beard, the fictional Bobby Durango in the film.
Meanwhile, Russell Cummings, the other director, gets into the skin of Sheriff Morris. "Growing up in Texas watching westerns taught us to be men. Honor, love and passion for the Old West is what defines the film," he says.
Destination Almería
Those responsible for the 'Six Bullets to Hell' was written by Chip Baker and Jose L. Villanueva, and it was clear it could only take place in Almeria. "To come to the birthplace of the 'Spaghetti Western' is the best. You have to work for the film to have that look: here the desert and sets are more authentic."
Also, Danny Garcia notes that the experience "has been very positive" and Almeria made a great impression on the production managers. "With any luck we’ll be rolling back soon for another western," he says.
﻿