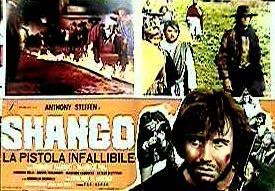 The Ranger Shango is the prisoner of ex-Confederate Major Droster, and a Mexican bandit, Martinez - who have installed themselves as masters in a village of poor peasants. Unexpectedly he regain his freedom and finds refuge in the home of a peon, Fernandez, who asks for help, for themselves and for the others, against the two oppressors. While the henchmen of the Mexican search for Shango throughout for the entire village, the elusive ranger eliminates them one by one, till Martinez, unable otherwise to get the better of him, decides on a plan to blackmait the peons by threatening to kill their wives unless Shango is turned over to him. Pretending to surrender to Martinez, Shango is lead to the the bandit, but the ranger, quickly pulls a gun, killing both him and the survivors of his gang. Now Droster pretends to want to give up the fight against Shango, which until now has preferred to send his men into the fray with Martinez. He moves away from the village, only to return and by surprise, catching the ranger off guard and disarmed. Protected by the wives of the peons, however, Shango manages to get a gun and kill the major and his men.