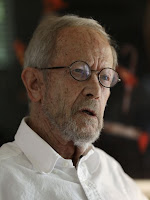 Elmore Leonard, the legendary crime and western novelist and screenwriter who wielded sharp prose and created quirky misfit characters to captivate a legion of readers, has died, his literary agent said Tuesday.

The 87-year-old writer, who had been recovering from a stroke, wrote novels in the crime and Western genres, as well as short stories and screenplays. He recently won a lifetime achievement award from the National Book Foundation.

He is the master of quirky, well-drawn characters, snappy dialogue, clever plot twists and a narrative style so spare it reads like haiku. Its simple beauty can put a bullet through your heart. He thinks most crooks are dumb, and that dumb is funny. He likes a good caper and the violence seems to be almost incidental, more like an occupational hazard.

Born in New Orleans, Leonard and his family moved to Detroit, the city that became his literary canvas. He had been writing for decades and supported his family by churning out lines that sold Chevy trucks, all the while saving his best for himself. He'd get up at 5 each morning and write until 7 before heading off to the day job at an ad agency. He quit that day job in 1961.

He first wrote Westerns and Hollywood discovered one of his stories -- "3:10 to Yuma" and made it into a film twice. When Westerns went out of style, he turned to crime fiction. He created some of popular fiction's most memorable tough guys: trigger happy federal marshal Raylan Givens, streetwise Hollywood wannabe Chili Palmer and smooth talking bank robber Jack Foley.

Some of his famous novels, such as "Get Shorty" and "Hombre," have been made into movies.

He's won awards such as the Grand Master Edgar Award from the Mystery Writers of America and the F. Scott Fitzgerald Literary Award for outstanding achievement in American literature.

"He was truly a giant of the genre and will be sorely missed by fans all around the world," the Mystery Writers group said.

Leonard wrote the stories which were made into two Euro-westerns "Valdez is Coming" (1971) and "The Tonto Woman" (2007).