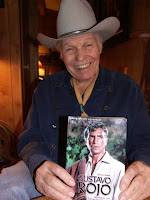 Born Paul Henderson, Jr., in Pueblo, Colorado on August 8, 1923, Henderson was reared on a ranch and became an expert marksman and trick gun artist and is a former ranch foreman. Henderson traveled widely with the Merchant Marines during World War II and has had homes in Torrance, Laguna Beach, Palm Springs and finally Ridgecrest, where his mother, father and aunt lived. As an actor, Kelo was a master of arms and taught many of his peers how to use their guns on screen. Henderson appeared as Deputy Clint Travis in the 1957-1959 syndicated western television series 26 Men.

Henderson's first screen appearance was as Doc Pardes in a 1957 episode of the ABC western ‘Cheyenne’, starring Clint Walker. Also in 1957, he played the role of Ike Clanton ‘Tales of Wells Fargo’ on NBC. In 1958, he appeared in 1958 in ‘Sergeant Preston of the Yukon’. He made an uncredited appearance that same year as a cowboy in the film “Saddle in the Wind”.

After ‘26 Men’, Henderson's acting was limited to the role of Frank Wilson in the 1965 German film, “Treasure of the Aztecs” and “Pyramid of the Sun Gods”, based on intrigue in Mexico during the 1860s at the time of Emperor Maximilian and directed by Robert Siodmak.

In 2003, Henderson received the Golden Boot Award for his work in westerns. Now retired, Kelo lives in Ridgecrest, California with his lovely wife Gail.


Today we celebrate Kelo Henderson’s 90th birthday.
Posted by Tom B. at 5:25 AM