Who Are Those Guys? - Toure Beubacar 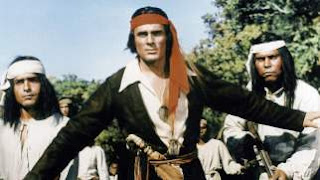 Touré Beubacar was born in 1949 in Guinea. He’s another of the mysterious actors who appear in a few films and then disappear. Beubacar appeared in only two films that I am aware of both made in 1970.  He appeared in the Sci-Fi film “Signale - Ein Weltraumabenteuer” and one Euro-western “Osceola” as Black Panther. I can find reference to a Dr. Boubacar Touré  so if this is him he may have appeared in a few films to pick up some quick cash to apply toward his college education. I also find reference to an artist with that name. After these two roles his trail goes cold until we find a published date of the death of Dr. Boubacar Touré on April 4, 2011 in Kinshasa, Guinea in a plane crash. This Touré was a Reproductive Health Advisor for the International Rescue Committee of the UN for the Congo.  Whether these two men are one and the same is still inconclusive.