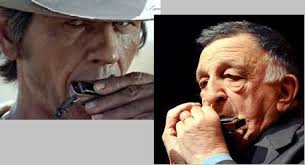 Three men wait at a remote railway station for another. A haunting, surreal, echoing trio of notes on a harmonica announces the arrival of the man they have been waiting for: a gunfighter played by Charles Bronson, known only as "Harmonica". This is a parody of the Gary Cooper film High Noon and believed by many critics and film enthusiasts to be the opening to the greatest Western ever made. So begins Sergio Leone's classic film Once Upon a Time in the West, featuring the music of Ennio Morricone.

The musician who actually played the harmonica in this film was Franco De Gemini. He was one of a number of musicians who regularly worked for Roman orchestras recording film music, and contributing to a very particular style. As the harmonica was an iconic musical instrument in the Western genre, De Gemini can be heard on a great many Spaghetti Western soundtracks of the 1960s and early 70s.

The son of a policeman, De Gemini was born in Ferrara in northern Italy in 1928. He grew up in Turin and initially had no formal musical training, becoming interested in the harmonica while at school. He subsequently enjoyed playing simply to amuse himself and his friends.

But a professional career beckoned in the 1950s when De Gemini found himself recording for film scores such as that by composer Alessandro Cicognini's for Pane, amore e fantasia (1953). Cicognini had worked for Vittorio De Sica and composed the score for The Bicycle Thieves. In the same year De Gemini also played in the San Remo Festival, at which time he joined the orchestra of film composer Berto Pisano, and started to make recordings for film and television.

One of De Gemini's proudest recollections was being invited to play on the recording of Leonard Bernstein's West Side Story in 1961. However, it was during the 1960s that the resurrection of the Italian film industry, especially dominated by the Spaghetti Western genre, ensured that De Gemini's harmonica would receive generous exposure. Almost always, when a harmonica was required, Morricone would call on De Gemini, but he also worked for many of the other great masters of Italian film music, including Bruno Nicolai, Francesco De Masi, Franco Micalizzi, Nico Fidenco, Riz Ortolani and his friend – and the leader of Italy's most respected choral group, I Cantori Moderni – Alessandro Alessandroni.

De Gemini can be heard on the first Sergio Leone Western, A Fistful of Dollars. However, it was in 1968 that the harmonica became the subject and central image of a Western movie about Western movies – Once Upon a Time in the West. De Gemini and Morricone wanted to create a haunting three-note motif which would be almost impossible to recreate with another instrument. To this end, De Gemini physically adapted his favorite harmonica – a Hohner Chromatic – in order to create an individual sound which is heard repeatedly throughout the film. He took the harmonica apart and rebuilt it. Famously, some of the music for the film was recorded before filming and played during shooting. De Gemini was also on the set to tutor Charles Bronson in how to use the harmonica. Leone was so pleased with the resulting effect that he promised to give De Gemini a gold harmonica, although this never materialized.

During his lifetime De Gemini performed on more than 800 film scores, as well as composing for films. His favorite contribution was for the 1965 film Italiani Brava Gente which featured a film score by Armando Trovajoli. In this De Gemini duets with the esteemed flautist Severino Gazzelloni.

One of the best film scores he was ever featured on was that of a 1975 film about the Italian railways entitled Allora il Treno, directed by Emilio Marsili. The score was composed by Morricone's frequent conductor Bruno Nicolai. Here, De Gemini's harmonica evokes the stress and mechanical effort of the train brilliantly and recalls certain aspects of the surreal inventiveness of Once Upon a Time in the West.

In 1968 De Gemini founded a record company, Beat Records that published many best-selling film soundtracks, including an award-winning release of the soundtrack to Death in Venice. In 1985 he formed the music-publishing company Pentaflowers which acquired control of a thousand original film soundtracks.

In 2006 De Gemini published his memoirs of a particularly successful life in music, From Beat to Beat which also included a CD of tracks from his film scores, The Man with the Harmonica.

I first met De Gemini in the 1970s while researching Italian film music. He was an immensely generous and larger-than-life personality, who enjoyed a role as a raconteur and was fond of cooking. He was very helpful and would not think twice about picking up the phone and calling composers to clarify a question or point of detail to answer an enquiry. He was a close friend of the late film music composer Francesco De Masi, with whom he regularly worked. Following the announcement of De Gemini's death, De Masi's son Fillipo De Masi described De Gemini as "an artist out of the ordinary".

He seldom spoke of other harmonica players, but a peer he especially admired was the American Larry Adler, who had also worked in films. De Gemini has been regarded as one of the greatest harmonica players to have worked in the film industry. He is one of the last of the many great musicians who contributed to and created a particularly definitive style of music for the Italian cinema in the latter part of the 20th century.