THE SHERIFF OF ROCK SPRINGS 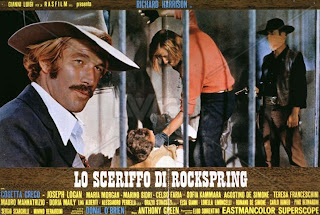 A bandit named Burt, escapes from prison, and hides out near the town of Rockspring, where the custom of the election of the "little sheriff," is taking place. A child, a young boy or girl, will work for the sheriff for eight days. The state of relative tension that reigns in the town comes from the fact that it is inhabited mainly by Protestants and by a minority of Mormons, both groups aspire to appoint its own candidate: the Protestant nominate Stephy and the Mormons nominate Schelly: Stephy is elected. Meanwhile Burt, comes to the farm of Mormon Jones, to obtain weapons and, once he’s acquired a gun he resumes his journey taking with him Dania, the daughter of the poor man as a hostage. The Schelly, has seen the robber who manages to get away with his ​​hostage. Schelly is unable to draw the attention of any of the adults, so he brings together some of his friends and they try to stop the outlaw. Burt easily gets rid of the boys, but is subsequently arrested by the arrival of adults who have been searching for him. The small sheriff Stephy, recognizing the courage and spirit of initiative by Schelly, spontaneously offers him the star that symbolizes the office of Sheriff. The two religious communities celebrate together, in a spirit of renewed peace.
Posted by Tom B. at 5:47 AM