Routes to cinema locations in your pocket 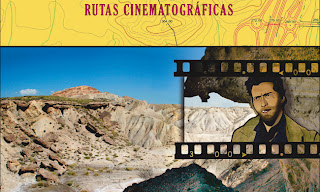 Brothers Ivan and Zoido Salazar have published two books on Almeria and Seville that follow in the footsteps of the films which were shot there.

Strolling through Seville evokes the epic story of “The Wind and the Lion” and “1492. Conquest of Paradise”, foot races of' “Nadie conoce a nadie” and motorcycle chases in “Noche y día”. Visit Almeria and tread the sand as in Indiana Jones in “The Last Crusade”, under the sun that burned “The Good, the Bad and the Ugly”, between the landscapes we saw “Conan the Barbarian”. Ultimately they’ve united these two locations for the best film locations of Andalusia tourism through its film legacy.

This is the idea of a ​​publishing project carried out by brothers Ivan and Said Zoido Salazar by stamp Spink (Publications and Research Services Kalírroe): a collection of guides that already has two titles, The film Almeria, published a year ago, and Sevilla in film, which has just seen the light of day.

Although there are other publications that also explore the cinematic tradition of these provinces through guided tours, the approach of the Zoidos’ is very original. Each itinerary also includes maps and interesting information, current photographs of the places and landmarks immortalized on screen showing the same frames employed by the filmmakers: is what they call 'filmpoints'.

In English and Castilian

Sevilla in film has two versions, one in Castilian and English. "If we talk about tourism in Spain we must use both languages. They are two publications that are interesting especially for foreign tourists, "says Ivan Zoido.

The film Almería now has a second edition after a successful first run. The authors then divided the first publication into two volumes: one dedicated to Tabernas routes and another for the rest. Thus, the price will be equal to that of Seville having less pages also reducing its size to film routes making it now a pocket edition.

"The project is very new, something that has not been done so far. We used photos from the same place as the directors put their cameras and then mark it with a box at the same level which is seen in the film, with a short synopsis of the scene, it appears and is even given GPS coordinates. “It's like being in the movie," explains Ivan Zoido to CineAndCine.

The task, therefore, is very complex. "There is much research behind where to photograph the places and then find the corresponding frame." Said Ivan who handles the text, photographs and design.

'Sevilla in the film' (11.95 euros) has in its 120 pages, pocket size, four paths through the city, always from the historic center, where some forty titles are cited as “Lawrence of Arabia” (1962), “Alone” (1999), “Star Wars Episode II. Attack of the Clones" (2002), “The Kingdom of Heaven” (2005) and “The World is Ours” (2012). "In each of the itineraries is included a recommended visit: Plaza of Spain, the Alcazar, Plaza de Toros and the House of Pilate. For example, the Bullring has been seen very little in film but we were forced to put it," he says.

The book comes complete with an appendix of other points, cultural and cinematically relevant, which are independent routes or off the beaten track  they are provided by location or isolation.

Meanwhile, The film Almería (17.95 euros) is slightly longer and larger. It consists of 150 pages and draws eight routes: one for the city, three for the Cabo de Gata-Lift, four for  the Tabernas Desert Alhamilla. Not missing any of the famous films made in the province, “For a Few Dollars More” (1965), “Patton” (1970), “El reporter” (1975) and “Indiana Jones and the Last Crusade” (1989 ), and not forgetting “Lawrence of Arabia” (1962), the first major blockbuster to be filmed in the 'European Hollywood'.

There is also an additional chapter with extensive information about hotel and restaurant establishments in the province.

The brothers are working on a third volume of the collection, which will be dedicated to Granada and could see the light in the spring of 2014.

Link to order books: http://www.libreriaproteo.com/libro/ver/id/972371/titulo/la-almeria-del-cine-rutas-cinematograficas.html
Posted by Tom B. at 5:25 AM