A HOLE IN THE FOREHEAD 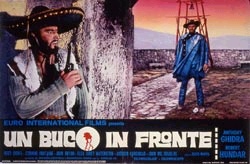 In the Sierra Nevada Mountains there is a hidden treasure stolen from the army of Santa Ana hidden in a secret place. In order to locate the treasure one has to locate three cards on which a map is drawn, each of which is owned by a different person: one is the army deserter Munguja, the second is in the hands of the bandit named Murienda, the third one is owned by Garrincha, another outlaw. Murienda, becomes aware of the fact that Munguja has one of the cards. Needing help he contacts gunslinger Billy Blood and makes a rendezvous at the mission of San Juan. Unfortunately Murienda is killed before arriving at mission San Juan where the monks have buried him. During the night, four henchmen of Munguja exhume the body of Murienda and take the card. Blood intervenes and eliminates the bandits and then forces the rest of the gang to take him to Los Cerritos, Munguja’s lair. Here, the gunslinger also takes possession of the second card, but the outlaw chases and recaptures him. Blood manages to escape, with the help of two Mexican girls and reaches the mission of San Juan, only to discover that Munguja and his men have killed all the monks and found the treasure. Garrincha has set a trap for Munguja and Blood. The three meet at the mission where the treasure is hidden and face a final showdown.

YouTube link: http://www.youtube.com/watch?v=f2EqIbSIwUg
Posted by Tom B. at 6:18 AM