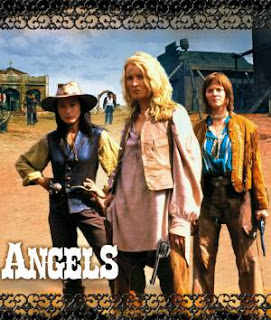 In the waning days of the Civil War, rebel stragglers plunder the community of Silver Creek, raping the women-folk for good measure. After the marauders slay their male relatives, Hannah and the Widow Wilson, who've just lost a four-year-old son and a spouse, respectively, unleash their fury on the male gender. Decked out in distinctive hoods, Hannah and her girl gang pose as male outlaws and knock over banks. Using their feminine wiles, they even fool a pursuing posse and gun them down. But an old incident in Silver Creek, where they executed a rebel general, come back to haunt them. The girls ride into interference in a town housing a federal payroll; the dead officer's son, Wes, comes looking for vengeance, joined by friends cowboys Jack, Syl and Billy, who had friends in the slaughtered posse. While Wes expects the hooded thieves to gallop into town, the amazon angels are already there, masquerading as saloon hostesses. Inevitably, romance compromises the gang's professionalism — Hannah falls for Wes, much to the dismay of her lesbian lover Ellie, while the Widow Wilson dallies with Jack. During the payroll heist, Ellie uncovers her face before witnesses, figuring that if she's forced to become a fugitive, Hannah will have to join her. But as the women retreat from the scene of the crime, Hannah is wounded and fellow bandit Jane is killed. How can Wes and Jack reconcile their romantic feelings with the vendetta they've sworn against the beautiful bandits?