HIS NAME WAS POT... THEY CALLED HIM ALLEGRIA 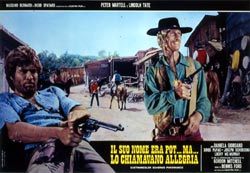 Pot, a light-hearted outlaw with sarcastic ways, carries out a bank robbery with the help of his brother Ray, a former undertaker, and a ferocious bandit named Steve. Steve is determined to keep for himself all of the loot. He kills Ray, but becomes in turn a prisoner of Lobo, a Mexican bandit, who also wants to take the stolen money. Lobo faces Pot, who kills him and frees Steve who he is unaware of the assassination of his brother. Then, with the evidence of the crime committed by Steve beats him to death, riding away with the loot. Stopping to take a bath in a pond, a peon robs him of everything. Without losing his usual cheerfulness, Pot, completely naked, resumes its journey towards new adventures.