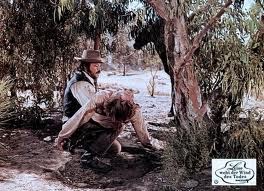 A rich and ruthless rancher named Brandt Ruger treats his beautiful young wife Melissa like a piece of property and subjects her to his will. After Ruger and a group of friends leave on a hunting trip Melissa is kidnapped by the famous outlaw Frank Calder. Frank wants to learn to read so he takes Melissa, a local school teacher, with him to teach him. Calder tells her, he doesn't know or care who's wife she is. He takes care of her well, and eventually Melissa falls in love with him. But when Ruger is told of the crime he feels humiliated. Full of hate and revenge, he sets out to kill Calder and Melissa too, if necessary. Together with his friends and their guns, equipped with the newest technology of high power and long distance capability of up to 800 yards, Ruger begins to eliminate the gang one by one until only Calder and Melissa remain.