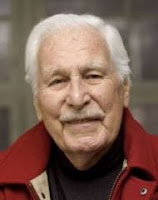 The actor and voice actor Friedrich Wilhelm Schoenfelder has died at the age of 94. Schoenfelder played hundreds of roles in theater and in film, among other things, in the Edgar Wallace films. The actor has also dubbed over 400 films and TV series. Schoenfelder was married and the father of two sons. His elegant appearance always made sure that actor Friedrich Schoenfelder was always busy as a gentleman even at a very young in his career. He had hundred of choice roles in the Berlin theater and in movies. On Monday August 15, 2011, the actor and voice actor died at the age of 94 years with his family at his bedside. Schoenfelder was the son of an architect and was born on October 17, 1916 in Sorau in Lower Lusatia, Brandenburg, Germany in what is now Poland. In 1936 he appeared in Berlin, under Gustav Gründgens, where he had been at the acting school of the Prussian State Theatre for his training, his professional stage debut. In Frankfurt, he made an early 1950s appearance at the City Theater. 1948 he began his film career where he had the lead in four films. The list of film and television work of Schoenfelder is very long. From the mid-50s he was constantly in front of the camera: from the airplane drama "Abschied von den Wolken" (1959) to "Unsere Pauker gehen in die Luft" (1970) to series like "Berliner Weiße mit Schuss" (1984) and "The Wicherts von nebenan" (1986) extends the spectrum. He participated in four Edgar Wallace films. Even though they are now considered cult, he found them to be terrible. "The crowd just has a bad taste and it is why there are so many bad things on television and in the movies," he said in a 2006 interview with The Associated DAPD. The novels which he had already read as a young man and was already upset about how stupid and bad they were.

Schoenfelder always returned to the theater. He had a role in the staging of John Patrick's Frankfurter "The Little Tea House" was one of the personal milestones of his career. 175 shows were played. 1,200 times he stood on stage after in the premiere of the musical "My Fair Lady" at the West Berlin Theatre as Colonel Hugh Pickering, and finally Henry Higgins in the lead role in the theatrical version for his character was played by Rex Harrison. Schoenfelder lent his voice to many U.S. stars in the dubbed German versions. He was the German voice of such international fellow actors as Vincent Price, David Niven, William Powell, James Mason and Alec Guinness. About 400 films did Schoenfelder dub throughout his career and with his distinctive voice as narrator, for example, 140 episodes of the "Kingdom of Wild Animals". In 2006 he received a Lifetime Achievement Award the German dubbing Prize.

"Acting is not a profession, which one does until they are 65 years-old and then you retire and look forward to finally being able to grow roses," Schoenfelder said in an interview on his 90th Birthday news agency DAPD. "An actor wants to work in the best case until his death."