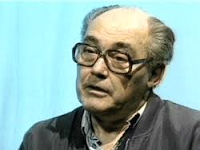 Hammer Horror screenwriter Jimmy Sangster dies.The British director, whose writing credits for the Hammer label included The Curse Of Frankenstein, died August 19, 2011 aged 83.Born December 2, 1927 in North Wales, Sangster scripted two of the company’s most successful and defining films, 1957's The Curse Of Frankenstein and 1958's Dracula (called The Horror Of Dracula in the US), both of which threatened their Universal depictions for iconic status. His other writing credits for the company include The Revenge Of Frankenstein, The Blood Of Dracula, The Mummy, The Brides Of Dracula amongst many others, and in 1970 he added direction to his repotoire with The Horror Of Frankenstein and Lust For A Vampire.Elsewhere in the genre Jimmy Sangster wrote episodes of Kolchak: The Night Stalker, Wonder Woman and The Six Million Dollar Man.
Sangster produced and was a co-screenwriter for 1961's "The Savage Guns" starring Richard Basehart.
Posted by Tom B. at 10:15 AM