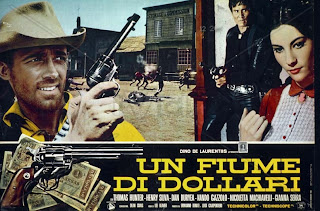 Jerry Brewster, and Ken Seagall, two ex-Confederate soldiers, are making their way home after the war. They have successfully stolen a Union payroll but are suddenly discovered and pursued by a detachment of soldiers. Jerry is left to be captured while he leaves Ken to escape with the loot and the promise to care for his family. After five years in prison he returns to his hometown to reconnect with his family and Seagall. He is surprised that Ken has become a rich and powerful landowner, and has gang of henchmen headed by Garcia Mendez in his service acting on his behalf. Jerry also discovers that his wife has been dead for several years because of the hardships she suffered after the war and that his son is forced to become a stableboy. Aided by a mysterious stranger, Jerry manages to get rid of Seagall’s henchmen and, in a decisive battle, is able to defeat Mendez and Seagall. Jerry’s mysterious partner turns out to be an envoy of the government sent to recover the stolen U.S. dollars, and, gratefully, he appoints Jerry the sheriff of the now pacified town.