HEY AMIGO... TO YOUR DEATH! 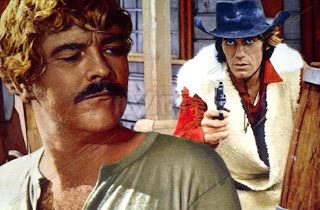 An outlaw named Barnett, and his gang of eight henchmen take over a town in Texas, to ambush a stagecoach carrying a hundred thousand dollars in gold. After the robbery is carried out the bandits make their way to their hideout, an abandoned mine. A federal Marshal, Dove/Doc Williams, goes in pursuit of the outlaws determined to exterminate them. Along with the help of a vagabond named El Loco, Williams avoids an ambush by three assassins hired by the outlaw. Williams reaches the hideout of Barnett and kills seven of his henchmen. The only one to escape Blackie, who Williams is convinced is in possession of the hundred thousand dollars because it is not found in the mine. Williams again gives chase, culminating in the death of the bandit. Blackie does not have the gold however. It seems El Loco who has played dead during the shooting in the mine and has the loot taking refuge in Mexico, but Williams discovers the deception and is able to recover the gold.

YouTube link: http://www.youtube.com/watch?v=tGcNA28PPhQ
Posted by Tom B. at 7:48 AM