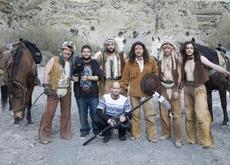 Cowboys vs Indians in the filming of a new short film

Paul Vega has completed his new film “Bastards” in the desert scenery of Tabernas. Nuria González, Daniel Ferrer and Jesus Laguna star in the story line

When a genre has the force and the natural setting of the Tabernas desert it becomes the perfect setting, film makers are inspired by the western and decide to tell a story. The director Paul Vega, with his team and his group of actors, filmed yesterday and star in his next short film that was able to attend “Bastardos”.

Around Rancho Leone, in a ravine of the Tabernas Desert, the crew and actors shot close-ups and general shots following a nearly chronological order of history unfolding in this space.

The main actors are the bastards: Nuria González, Jesús Laguna and Daniel Ferrer. Sergio Robles is in charge of sound and plays one of the characters, Emilio Fenoy is the illuminator and Mark Rock, camera. Also participating were three riders in the sequence that came afterwards: Enrique Durio, David Rojo and Diego Garcia.

Drawing on resources and a small budget, the images are the main ingredient to get a moving message to the viewer in a short space of time. The director's ideas are clear and his orders are directed toward the concentration of images giving the most meaning to each of the gestures that appear later on screen.

The plot goes through a band of bastards who wander in the desert. Its leader, being killed, the man’s son takes over leadership of the gang. Young people make fun of him for his poor gunmanship and he wants to demonstrate his value by starting a war with the Indians"said Paul Vega.

Dressed in western dusters and costumes, armed and prepared to face any grief that comes before them, the performers were characterized from head to toe as if they were represented such films as a “Fistful of Dollars” or other similar feature films.

The story shows how living in the desert, disoriented, and barren the atmosphere was good between the team yesterday filming “Bastards”. With so many characters playing, and the humorous dialogue the crew broke into laughter. Typical of any filing out-takes, which create greater complicity between all actors and other team members.

Different characters, locations and actors star in different places in the film that will be first shown at the, Tell it in 90 Seconds Festival, at the School of Image and Sound in Almeria.

The cameraman Marcos Rock is close to the director of the film and had to master the different levels of “Bastards”, while Paul Vega told him how he wanted to be conveyed into final film.

In a low-budget short film, the various functions of the members are varied. The head of sound donned a cowboy suit and played a mute character indicating that the danger was near. It is one of the funniest scenes of the film and will provoke the smiles of future viewers.

After noon, a sequence was filmed out at the Oasis theme park on the boulevard of Tabernas.

There are seven short films that Paul Vega has been in his career: “Dreams”, ”Blanco y Negro”, “El escenario de la vida”, and “Bastardos”. The director has also participated in twelve movies, including “800 Bullets”, “Blueberry”, “El Camino Real .... "besides being a singer and has been a participant in many advertisements."

Story: After the death of his father a young man takes over leading a group of outlaws and wants to start a war with the Indians to showoff his skills with a gun and as a leader of men.