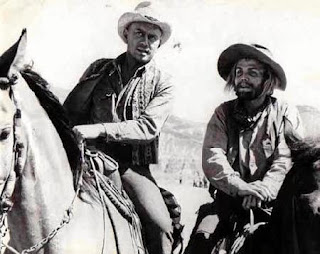 At 66 years of age, actor Dan Van Husen has returned to Almeria, where he was a regular feature in half a dozen films, mostly westerns. He does not remember what his first film was but he worked with Klaus Kinsky. In 1968, he came under the direction of Duccio Tesari, then came "El Condor" with Lee Van Cleef, films with Enzo Castellari, Sergio Corbucci, along with Faye Dunaway, Franco Nero and Yul Bryner, among others. "We ate pancakes in Yul's trailer and then when I went to Munich for the premiere of "Catlow" he helped introduce me to the press. He gave me his address and phone number", remembering the bald actor.

From his first contact with this land he's retained its image. "I was impressed by the desert. Three weeks ago I was in Arizona and I sincerely believe that this is much better." Part of the Almeria landscape has been revived today by Jesus Contreras, Almeria  nature specialist of the company Oz Nature.

van Husen on Almeria states that, "The people were very decent and the faces of the Gypsies were delightful. The horsemen and Spanish stunt experts were the best. Rafael Albaicín, Luis Barboo, José Canalejas ... there were many. " He remember that the Gypsy stutnmen charged for each fall and every pirouette, so "The first time was not very good, then the second was better and the third better yet."

"I did not speak Spanish and we were so busy. We were just so tired because we were working all day since early morning. We spent the evenings at the Grand Hotel bar without changing our film clothes. We showered and at ten we went to bed", he recalls.

van Husen witnessed the density of film shooting in our land. "The day that we ended "Catlow " we started on "The Ron Boulevard. " They were trying to kill Lino Ventura and clearly in the end it is why he died. With his hard face worthy of Sam Pekimpah, Dan was almost always a villain and, therefore, was seldom alive at the end of a film. This happened in "Catlow", whose last scene was shot without him in today's House of Cinema. Dan's visit with his friend Alex remembering old friends. "It's a good start but Almería needs a major film festival like Berlin. Everyone knows Almería and its movie history. I was recently at the First Los Angeles Spaghetti Western Festival in the United States where three films were screened which were shot in Almeria. The history of cinema in Almeria has to be more present in the world". Dan has tried in vain to donate to Almeria, documents of his career but found no official response.
Posted by Tom B. at 11:09 AM