A Girl is a Gun 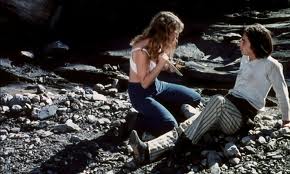 "A Girl Is a Gun" pulls a bait-and-switch on the psychedelic Western. In striped pants and a floppy pageboy, Billy the Kid is a gunslinger pursued through a barren, shape-shifting wilderness, aided, or maybe misled, by a heavily tanned, blue eye-shadowed vixen named Ann. Originally titled Une aventure de Billy le Kid, Moullet's bricolage oater was aptly, if impossibly, described by its creator as "a marriage of Duel in the Sun and Les dames du bois de Boulogne." Generally comic, Moullet's dislocations reach an unsettling pitch; the movie's sideways leaps induce a bit of Sartrean nausea. Dubbed into purposefully awkward English, Girl gives the stick-thin Léaud a booming Randolph Scott bass, the better to intone lines like, "Just beyond the snow is the Mexican border," and "I wondered how they found my trail so fast. Now I know. They got a dog." It's hard to imagine the movie working as well in its original language. - Sam Adams
Posted by Tom B. at 6:32 AM