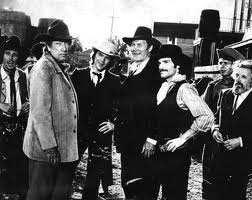 After a bank robbery in Crane City, where several people are killed and the town briefly taken over, Sam Clayton and his gang arrive in the small town Juno City where Father John is the priest of the town church. After having a little bit of fun, the gang leave town only to be caught by father John. Vowing to have revenge, the gang gun him down on the steps of his church and then set about taking control of the town while waiting for the stagecoach.

However, little Johnny manages to escape with a couple of their horses and rides off to Mexico in the hope of finding the priest's brother Lewis ‘Diamante Lobo’, a noted gunman . They soon meet and set off back across the border to clean up the town. Meanwhile Clayton discovers that he is Johnny's father. It seems that some fifteen years ago during the Civil War, Jenny O'Hara had been one of Clayton's rape victims and now Clayton takes to the idea of being a father.

YouTube link: http://www.youtube.com/watch?v=RSer6VULBzs
Posted by Tom B. at 6:16 AM