GOD MAY FORGIVE YOU, NOT ME 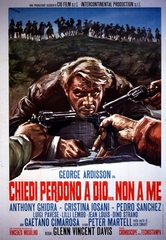 In a cemetery on the Mexican border we meet Manuel, a young man driven by revenge, and an elderly American gentleman named Cjamango. Cjamango tries, to divert Manuel from his vengeful fantasies, he tells him the unpleasant memories of his tragic life. Some years earlier, while he was in town to pay the money needed to pay the mortgage of his family farm owned by his beloved Virginia Stuart father, bandits kill his father, brother and sister. From a Mexican named Barrica, Cjamango learns that the killers of his family are the Smart brothers and their gang which were paid for the job by the old Stuart, in revenge for old grudges. Stuart was killed in turn by Dik Smart because he refused to compensate him adequately for his brother's death, that Cjamango starting his revenge, had killed. After numerous battles in and out unscathed from deadly traps, Cjamango eliminates one by one the members of the band, including the leader, Dik Smart. At the end of his revenge, carried out with cold determination, Cjamango meets Virginia.