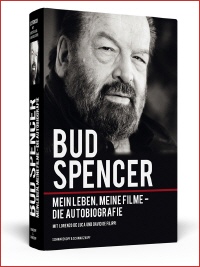 The number of cult films Bud Spencer is famous for as the hero to many fans of their childhood and a father figure they idolize him today. In My Life, My Movies - The Autobiography Pedersoli reveals Carlo alias Bud Spencer is filled with humor about how he sees himself: as a grumpy total artist, the word "retirement is a stranger," and as a loyal family man, is not quickly shaken.
Carlo Pedersoli is as impressive and embodied by his characters, but he is much more: a smart lawyer, a former high-performance swimmer who has twice participated in the Olympics, and a cosmopolitan who has traveled extensively and has seen even more. His autobiography will inspire more then just the fans of Bud Spencer.

My Life, My Films - The Autobiography of Bud Spencer's thrilling look back at his life. On his 80th Birthday the actor after recalls the indoor pool of his youth, when a handsome, tortuous fuming and slightly arrogant swimmer at the age of 20. He wrote the narrative for Bud Spencer, the stations of his life, of his younger self, with wit: Carlo as a child in Naples, the formative years in Rome, his time in South America, his swimming success, his studies, family, the birth of "Bud Spencer", and the collaboration with Terence Hill, his solo career and the many companies with which he always has been challenged with.

It is written with humorous anecdotes peppered with many autobiography sketches where Bud Spencer shows his personal side. The author Carlo Pedersoli is as impressive and warm as the heroes of his films.