Who Are Those Guys? ~ Matt Clark 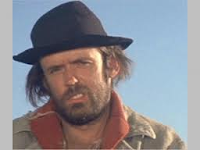 Matt Clark was born in Washington, D.C. on November 25, 1937, the son of Theresa (née Castello), a teacher, and Frederick William Clark, a carpenter. After serving in the military, he attended college at George Washington University, but later dropped out. After working at various jobs, he joined a local D.C. theatre group. After working at the famous Living Theater and starring in several off-Broadway plays, he moved to California to begin his film career. Matt has appeared in more than 50 feature films, in addition to countless television movies and TV series. He is the director of the film, “Da” (1988), starring Bernard Hughes, Martin Sheen, and his old acting teacher, Bill Hickey. His first credited film role was in "Black Like Me" in 1964. Matt would go on to become a highly respected character actor in more than 110 films and TV appearances including 30 westerns among which was one Euro-western "Kid Vengeance" (1977) as Grover. Matt was married to poet, actress and storyteller Erica Lann [1938- ] from 1958-1966. The couple had four children: Matthias Clark (musician), Jason Clark (producer), Seth Clark (film editor) and Aimée Clark (producer). Matt may be best remembered as the Chester, the bartender in “Back to the Future III” (1990).