Paella-westerns: the western cinema that made Tarantino fall in love

The Spanish film industry produced some bizarre cult films in the 1960s that the American director makes a wink in his last film. That was the phenomenon 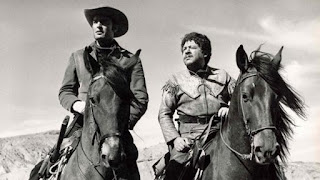 There was a time when Spain hosted a western film industry. The producers managed to take advantage of stony and desert lands, in search of natural scenarios such as Death Valley or the endless extensions of land in Arizona and Utah, and surrounded themselves with technical and artistic craftsmen with the obsession to clone, with spicy drops of ultraviolence, to the most characteristics of American cinema, the one that glossed the epic of the birth of a country looked upon as the greatest world power for centuries. The calls to the western European of the sixties and seventies are constant in the modernity that the director Quentin Tarantino represents for several films, and in this last summer’s premiere that searches for totems reaches the visual and narrative paroxysm, if that was possible in the cinema of the director of Tennesee, who dives into references of bad taste, old-fashioned, light draft and prestige, who have always accompanied him since he attended to clients in his famous video store.

But one of those ingredients pointed out in “Once Upon a Time in Hollywood” comes to life thanks to the premiere and moves many teenagers and I, captivated by the effluviums of the premiere, to wonder what role Spanish cinema played in that subgenre from the west to Europe, that perversion of the classic canons that had been created under Californian studies and with big names in front of and behind the cameras. Today we call it "chorizo ​​western", or better "western paella", looking for an association of ideas with Italian pasta that is more appropriate to the typically Hispanic gastronomic product. Some have tried to rename it as "cooked western" or even given its Almerian geographical ancestry as "gazpacho western", but paella seems to prevail among the propaganda labels with which this certain tendency of homeland film production based on themes, characters, stories and shootings of classic American cinema.

If in Italy they were able to export the things they were doing (many of them also shot in Spain) Sergio Leone, Georgio Ferroni, Tonino Valerii or Sergio Sollima, the most misplaced Spanish directors, those who left the conventional cinema circuit, renamed their names to be recognizable in his new dusty and powder-laden environment: thus, Joaquín Romero Marchent became Paul Marchenti, Manuel Esteba is Ted Mulligan, Ramón Torrado was reborn as Raymond Torrad, José María Elorrieta mutated into Joe Lacy, José Luis Madrid did it as Jim Delavena and even a director of great prestige in the postwar period such as Ignacio Iquino, with black films of incalculable value, was reborn as Steve McCoy to direct in the false towns of the border the arrival of errands and those faced with shots in the saloons of the city.

Do not forget: Alfonso Balcázar was Al Bagran in this maelstrom of mutations, whose start was even ahead of the arrival of the Spaghetti western, the landing of Leone, Eastwood and Morricone to our country. The cinema of the Spanish west, of only Spanish production and always shot within our country, came to attract very recognizable stars of the American billboard: Ernest Borgnine, Joseph Cotten and a young Telly Savalas. Almería or Burgos were the Spanish Monument Valley individuals in which the production teams that normally worked in coproduction with Italian producers or other countries were installed.

A great advantage of this fast-flowing and vertiginous oblivion film flow was to have its own literary bases, supported by the western novels that captivated several generations of readers. Marcial Lafuente Estefanía, J. Mallorquí, Silver Kane, Frank Caudett or Curtis Garland, who also hid their interesting pseudonyms behind the typewriter. The central years, those of greater quality in the titles produced, coincide with the irruption of this western to the Spanish: from ‘64 to ‘68, with a Madrid leader who took the flag that shortly after would be internationalized thanks to the Italians.

Joaquín Romero Marchent always showed a special interest in the epic of American West cinema, and moved his myths to Spain. In the casts of his films, always clones of the great successes of classic western, we can see names like Edmund Purdom, Paul Piaget, Gloria Milland, Helga Sommerfeld, Robert Hundar and Fernando Sancho, Miguel Palenzuela or Jesús Puente. In the sunsets full of dust and mud, the music of composers who exerted great influence of Rustichelli or Bacalov always exaggeratedly punctuates, as shabby as the eternal close-ups and exasperating zooms that can be seen at the rate of several dozen per minute.

In the initial phase, before Leone landed in Spain to shoot his trilogy, the Spanish western was nevertheless quite pure, seeking to assimilate in artistic canons the North American super western who keeps the quintessence of the genre: Lang, Walsh, Wellman, Zinneman, Not to mention the absolute masters Ford and Hawks. And we can even affirm today, with the perspective of the years, that at times it is superior to spaghetti to the extent that these defects or formal vices had not yet corroded.

Titles for the video library

Romero Marchent sought in his originals “The Taste of Vengeance” (1963) or “Seven from Texas” (1964) the white mountains, the green meadows, and the clean air that Shane of Deep Roots himself could look for, and then the transalpine filmmakers they would pervert even using the same wicker as him. By that time, Ramón Torrado had already directed “Welcome, Padre Murray” (1963), with a somewhat discolored patina of quality and including the thematic nuance of revenge the thematic nuance of racism with a black priest.

These brave men threw themselves even for the myths of the west: Torrado filmed “Cavlary Charge” (1964) with Allan Scott and Frank Latimore. A young José Luis Borau debuted in the feature film with “Brandy” (1964), with a script written alongside José Mallorquí and a setting in Tombstone, a city renamed Losatumba for national viewers. “Doomed Fort” (1964) by José María Elorrieta, “Five Dollars for Ringo” (1965) by Juan Xiol Marchal, “A Dollar of Fire” (1965) by Nick Nostro, the prestigious Leon Klimovsky in 1964 with “Billy the Kid”, and in 1966 with Barbed Wire of violence, “Clint the Loner” (1966) by Alfonso Balcázar with a hoarder George Martin as the protagonist ... although he was not the only one.

Richard Harrison was used many times to break the camera lens in those close-ups of “El Rojo” (1967). Harrison had been in the preselection of possible actors for “A Fistful of Dollars”, and he always joked to acknowledge that withdrawing from the struggle for the role for the benefit of Clint Eastwood was his greatest contribution to the cinema.