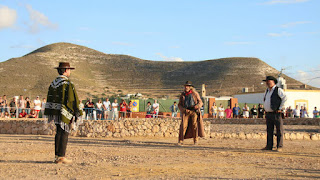 By Txabi Ferrero
September 8, 2019
The so-called ' Spaghetti western', a cult film genre with an epicenter in Almeria in the 1960s, will live again next Saturday, with a revival of a new edition of 'Crazy for the Western' and the representation of the film “A Fistful of Dollars”'.

Los Albaricoques and its surroundings will celebrate a cinematic past that changed the life of this small neighborhood of Níjar with a show and open-air cinema, a free activity, which they return for a time to the filming of the 1960s when this neighborhood was a set and its inhabitants lived daily with the director Sergio Leone and a then an unknown Clint Eastwood.

The one chosen for this edition is "A Fistful of Dollars", one of the mythical films of the 'Dollar Trilogy', along with "For a Few Dollars More" and "The Good, the Bad and the Ugly" which were directed by Sergio Leone, they were filmed more than half a century ago in these locations.

This year’s experience follows what was presented in 2018. Then it took place in the Cortijo del Fraile, with the representation of the scenes shot in the environment of the film directed by Sergio Leone “Once Upon a Time in the West”, with Claudia Cardinale, Charles Bronson, Henry Fonda and other greats of the cinema, hand in hand and good work of specialists and connoisseurs of western.

The 50th anniversary of the filming of this film was then remembered and the seventh “Albaricoques of Cinema” the play was inaugurated next to Cortijo del Fraile with the cinematographic productions that were chosen at this scenario in 1968.

The 'Spaghetti Western', term was coined by the Spanish journalist Alfonso Sánchez put Níjar, in particular, and the province of Almería, in general, on the world map of cinema with cult films and exceedingly, The Dollar Trilogy, a series of three unrelated movies of the 1960s, directed by Italian director Sergio Leone and with music by composer Ennio Morricone.

These films revolve around the character played by Clint Eastwood, sometimes known as Blondie (Blond), or Manco, who drew the prototype of a nameless man: the same poncho, clothes and hat, and the same countenance.