Her second novel, “Inland,” brings unexpected disturbances to the American landscape she grew up romanticizing from afar. 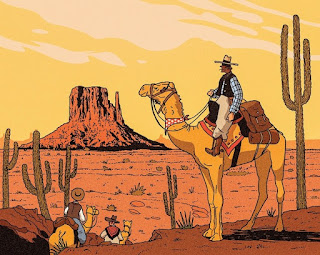 [Obreht defies genre conventions with an eclectic cast of characters, including camel drivers from the Mediterranean. - Illustration by R. Fresson]

Early in “Inland,” Téa Obreht’s new novel, we find the frontierswoman Nora Lark in the drought-stricken Arizona Territory, managing the fears of her seven-year-old son, Toby, who has discovered strange disturbances in the scrubland surrounding their homestead. The year is 1893. Toby has convinced himself that the tracks he’s found belong to some large fantastical beast, while Nora is certain the whole business is simply a product of her son’s overactive imagination. Soon Toby even claims to have seen the beast: huge and skeletal, with a ratty mane, folded wings on its back, and a pungent stink.

“Inland” itself cuts an odd figure in the Western landscape, and is a surprising follow-up to Obreht’s début novel, “The Tiger’s Wife” (2011), which garnered broad critical acclaim and sold more than a million copies worldwide. Obreht, born in the former Yugoslavia in 1985, set “The Tiger’s Wife” in an unnamed Balkan country emerging from war. As her protagonist recounted the stories and legends told by her recently deceased grandfather, the novel’s sense of place took on an air of universality. The stories, like the myths and folktales they invoked, transcended the specifics of time, location, and history.

Obreht’s actual grandfather, a central influence on “The Tiger’s Wife,” also provides the seed of inspiration for her second novel: obsessed with Westerns, he imparted his fascination with the American frontier to his young granddaughter. Obreht grew up imagining America as “a vast, unpeopled, almost supernaturally beautiful wilderness,” a place that, she has said, “seemed impossible to me, a landscape of the imagination more than anything else, a painted backdrop, the mirage of another age.” After spending her youth in the former Yugoslavia, Cyprus, and Egypt, Obreht first came to the United States at the age of twelve, settling with her family in the American South before later moving to Northern California. When she finally laid eyes on the West, she was captivated, and found herself “overwhelmingly bound to a place where I had no connection, no roots, no family, no cultural touchstone whatsoever.”

With “Inland,” Obreht makes a renewed case for the sustained, international appeal of the American West, based on a set of myths that have been continually shaped and refracted through outside lenses—from Karl May’s adventure novels to Sergio Leone’s spaghetti Westerns or, more recently, Chloé Zhao’s film “The Rider.” The fictional outpost of Amargo, where Nora and her family have carved out their home, is rendered by Obreht with instantly recognizable, almost cinematic clarity. The town teeters between the prospects of boom and bust, and Nora’s household finds itself on a similar precipice; after her husband goes missing on a trip to find water, her two elder sons take off following a heated argument about his fate, leaving her to look after Toby and attend to the family’s affairs on her own.

The West of Obreht’s grandfather—grounded in seductive stories of adventure rather than in the grim particulars of history—has been as potent to children in her native Europe as it has been to young Americans growing up in the conquered landscapes where its events actually played out. I realized, while reading “Inland,” that Obreht had imagined Amargo to be situated not far from the town where I was raised. Born the same year as Obreht, I, too, imagined the landscape as a backdrop for adventure—my friends and I played cowboys and Indians in our high-desert back yards with thoughtless abandon, and we participated gleefully in our town’s Frontier Days celebrations and its “World’s Oldest Rodeo.” But, even for those without roots in the American West, the setting of “Inland” is immediately familiar, part of a near-universal inheritance.

“Inland” interweaves the story of Nora and her homestead with the adventures of a young immigrant known as Lurie, an Anglicized version of his original surname, Djurić. In the book’s opening pages, he recounts to an unidentified interlocutor how he left the Ottoman Empire as a boy with his father, a Bosnian Muslim, who sought a new life in America. Not long after they arrive in an Eastern port, his father dies, leaving Lurie with only scattered memories of him. The ensuing details of Lurie’s story bear out any number of genre clichés—he falls in with a group of outlaws, kills a man, goes on the lam, and moves farther and farther west—but there are also hints that Obreht has something different in mind for him. Lurie sees ghosts and carries with him the desires of those who touched him in death—among them a child pickpocket with whom he once shared an attic room near the Missouri River. The boy dies of typhoid, but his spectre and his lust for petty larceny remain with Lurie.

After thieving his way along the Gulf Coast of Texas, Lurie is caught by a group of Levantine sailors in the act of stealing a nazar, a blue amulet like one that he remembers his father carrying as protection against the evil eye. It is here that we are introduced to a cadre of characters unfamiliar to the Western genre—Greek, Turkish, and Arab camel drivers from the Eastern Mediterranean who have arrived in America with a boatload of dromedaries, which are the first of their kind to set foot on the continent since their progenitors died out in the last Ice Age.

Once Lurie joins the cameleers, his story departs from its seemingly prefigured trajectory. This portion of the novel draws from an obscure chapter in history, involving the United States Camel Corps, a project of the U.S. Army that deployed camels as pack animals to support military operations in the arid Southwest. Obreht preserves many true details in her rendering of this short-lived experiment: the names and biographical details of the drovers and their military overseers, the route travelled by the caravan from Texas to California, the locations of their encampments, and the bizarre challenges presented by the animals along the way—their intense musk, for example, repels the other pack animals meant to labor alongside them. 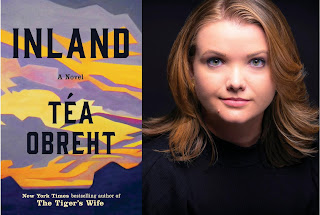 Much like Obreht herself, these characters and creatures from foreign lands are drawn to enact the grand dramas of a new culture soon after their arrival in the West. But as “Inland” progresses we begin to recognize the subtle ways that Obreht has been poking fun at various long-recycled stereotypes—Lurie’s unseen interlocutor, we learn, is actually one of the camels that he will later steal away from the Army unit, a nod toward the clichéd love often shared in Westerns between a boy and his horse. The real “cowboys” of the story, we come to find, are the Muslim camel drivers. And Nora, initially painted as the archetypal “woman in distress” awaiting the return of the men in her life, comes neither to need nor to accept any help as she works to hold together her fracturing household.